2022 was something of a revival in music. We witnessed the long-awaited return of artists like Beyoncé with ‘RENAISSANCE’ and Kendrick Lamar with ‘Mr. Morale & The Big Steppers.’ We welcomed artists like Allye Gaietto and Patrice Rushen back into our studios for more live performances than we’ve had since 2019. We even got to hear exclusive unreleased music from acts like BALANCE, Waajeed, Rebecca Goldberg and Sara Marie Barron.

WDET’s music hosts sifted through all this incredible work and carefully selected their top picks of the year, listed below. From Nick Austin’s soulful jams to Jon Moshier’s experimental soundscapes, there’s a wide range of music to explore here.

Plus, Tia Graham joined the CultureShift team as a co-host and producer in May, which means she got to share her first-ever Best Of playlist this year. Her picks were fun and upbeat and had the whole station dancing along.

Also making their Best Of debut was Sam Beaubien, WDET’s creative producer and leader of the acclaimed ensemble, Will Sessions. To share his picks, he was joined by Detroit DJs Meftah and Whodat, who introduced us to some groovy deep cuts and remixes.

Listen to the full playlist:

Want to jump to your favorite host? Click their name below:

Why We Speak (feat. Q-Tip & Esperanza Spalding) by Robert Glasper

I Wish I Knew (feat. Joni Inez) by Otis McDonald

Everything Comes in Waves (feat. STS) by Busty and the Bass

Stuck In The Middle by Greentea Peng

If You Only Knew by Gabriels

It Hit Me by Charlotte Adigéry & Bolis Pupul

A Madman from Manhattan by Jack White

Gold Sounds 3am by Charlie Burg

Do You by Strange Heart

Love Is The Way by Thee Sacred Souls

Arms Around a Memory by Beth Orton

BREAK MY SOUL by Beyoncé

the perfect pair by beabadoobee

If I Die Tomorrow by Jack White

Nice Work If You Can Get It by Sloan 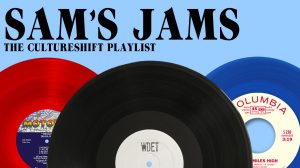 Pay It Forward by Meftah

If I Were Kyle by Jon Dixon

Good in the Bad by Ji Hoon Kang

Walk Cycle by The JuJu Exchange

Gettin’ to the Point by Panda Bear & Sonic Boom

The Overload by Yard Act

On the Edge by Automatic

Tripping at a Party by Los Bitchos

Silence Is Golden by The Beths

Nowhere But Up by Phony Ppl

To hear Amanda’s playlist on its own, listen on her Spotify page.

Oysters In My Pocket by Royel Otis

I Was Neon by Julia Jacklin

The Mainline Song by Spiritualized

Love Is The Tune by Mary Lattimore

Become The Lies by The Soft Moon

To hear Jeff’s playlist on its own, listen on his Spotify page.

To hear all of Jeff’s picks from the year, listen to his 10-hour playlist.

Heart About to Give Out by Of House

Easy Chair by The Walking Beat

Oh No by Adam Padden

I Can’t Feel (My Body) by Ally Evenson

Night at the Rock & Roll History Museum by Danny VanZandt

Doug Out by E.M. Allen

things we want to know by Vespre

How Could I? by Child Sleep

Support the shows you love.

WDET’s unique music programs are dedicated to exploring the music and culture of our region and the world.