In this episode of CuriosiD, listener David Gifford asks …

Who is selling “Corn Real Good” with signs all over Detroit? 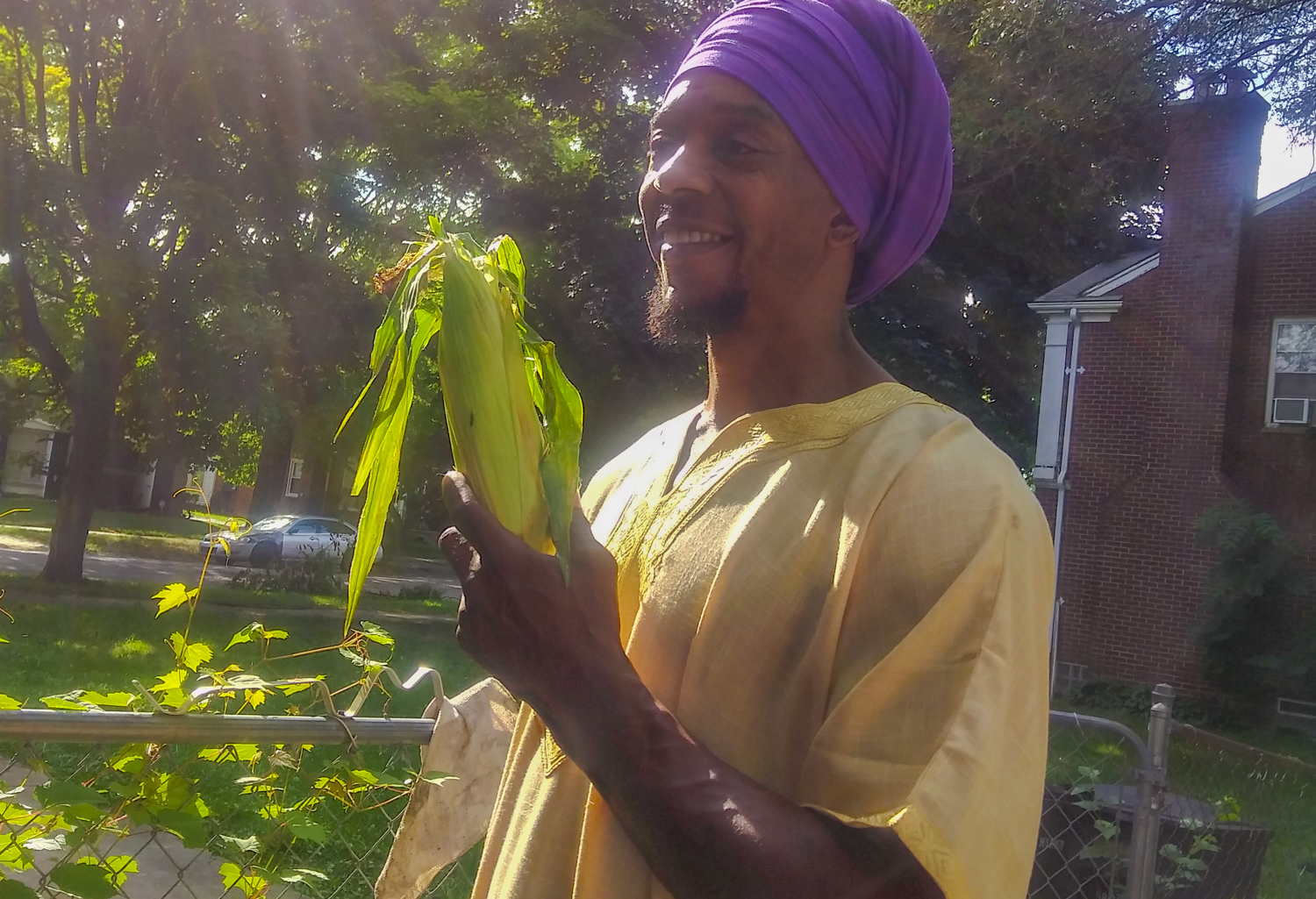 Orrin Fields started with some paint and a catchphrase “Corn Real Good.” Today he makes elotes — grilled Mexican street corn on the cob with mayonnaise, cheese, lime and Flamin’ Hot Cheetos — as a service to neighborhoods that no one is serving.

You could blink and miss them driving up the Lodge or on Jefferson. But once you’ve seen the signs, they’re hard to forget: “Corn Real Good” painted in yellow bubble letters on a red background. They’re scattered throughout Detroit like little breadcrumbs. And if you follow the clues all the way to the west side, you might find yourself on the corner of Puritan and Normandy.

The Corn Man is Orrin Fields. He walks over, his arms heavy with bags full of groceries like cheese, tortillas and pickled jalapenos. The buses were running late, so Fields is a little behind schedule. He heads to a row of red party tents that shade his grill and cutting board and gets down to chopping onions.

Fields has been cooking around the Martin Park and Pilgrim Village neighborhoods for seven years. The fifth-generation Detroiter says it started with some paint and a catchphrase: Corn Real Good.

“That was the whole slogan. That’s why I put it on the sign,” says Fields. “And when I first came out here, everyone who stopped would say, ‘That’s all you got is corn?’ I’m like yeah, but I knew it was a way that my people never ain’t had corn like this or had any corn the way I was serving it. It’s a cultural thing.”

Fields makes elotes — grilled Mexican street corn on the cob with mayonnaise, cheese and lime. Then, he tops it off with Flaming Hot Cheeto dust. But that’s not all he cooks now. A tow truck driver stops by and leaves with two hot sausages and mustard. Fields also cooks tacos.

Despite his popularity today, Fields says he didn’t always cook for a living.

“I used to really be into marijuana. I was growing the cannabis before the law changed. As soon as the law changed, it accelerated and it got beyond me to the point where I couldn’t compete. So I put the cannabis down and picked up the corn,” says Fields.

In the early corn days, Field says he would push a cart around with a grill on it. Now, he’s set up outside at this makeshift park. It’s a vacant lot, but the Corn Man made a good effort to breathe some life into it. He spray-painted little ears of corn onto wooden stumps nearby. He set up tiki torches for when it gets dark. He’s brought a generator to run his minifridge and he’s got an amp for music.

There’s a bunch of seating — bean bag chairs and colorful picnic tables adorned by plastic flowers and abstract sculptures that twist in the wind.

Fields says he moved everything here himself using a shopping cart and some elbow grease. He says if he didn’t take over these lots, there wouldn’t be much on this block.

“As far as Black-owned businesses and Black neighborhoods. Go up Dexter. Go up Puritan. Go up any of these major street and it’s like a ghost town in one of those old Western movies. In a major city,” says Fields. “It’s all about service. Nobody is serving the neighborhoods so I stepped out here.”

“I’m the hood ornament on the neighborhood’s Cadillac,” he adds before turning to serve a hungry customer.

The hood ornament on the neighborhood’s Cadillac

Besides the Corn Man stand and the church across the street, nothing within eyesight seems to be open around here. The liquor store down the street shut down at the beginning of the pandemic. Fields says the empty lot he’s on used to be a bunch of abandoned buildings and houses, and that was 30 years ago.

“They leveled it. And I remember in 1993 when they put the park here the year after I graduated. The trees were still little saplings. And now we’re all big trees. Just like the saplings, we grew too,” Fields says.

Fields says the McNichols-Puritan-Lodge Community Council used to run the park. The group also gave him and dozens of others in the area scholarships to the University of Detroit Mercy, where Fields attended. But now, it’s just the Corn Man here.

“I just displayed a little leadership. It only takes one to form a line. Just like my brother here standing, waiting for some corn. There will be four, five other people behind him in a minute. That’s all I’m doing,” says Fields. “The park is looking nice. Not too many neighborhoods in Detroit got a park at the end of their neighborhood like this. We’re using it. Not misusing it.”

And people are using it. There’s some guys posted up nearby with their mini bikes. One man clears trash from the garbage bins and helps Fields move his equipment. He calls himself Corn Man’s sidekick. Fields says the park’s become a gathering place that offers more than just food.

“I want to be the neighborhood icon. Somewhere for them to stop like we had somewhere to stop. I’m bringing back the mom and pop.” —Orrin Fields

“I feel like I’m running for office sometimes. Because people start coming and supplicate to you about all types of little issues,” says Fields. “I’m just out here, you think, selling corn. But you end up being different things to different people.”

There’s a man who arrived on a sportbike who chimes in.

“A therapist,” John Hill, who goes by Nutty, adds. “Everybody’s trying to talk with him. He’s a real cool dude, and he’s easy to get along with.”

Hill lives in the neighborhood and has been waiting for his elote long before the Corn Man showed up. He gets the first batch of the afternoon.

A few people who showed up before the Corn Man set up shop are circling back to order. And new ones are coming through now that it’s closer to dinner.

Marcus Wilson is on his way to his landscaping job down the street. The 14-year-old says he’s a regular customer.

“Either early in the morning when I’m walking to school or when I get out of school. Or sometimes when I’m coming from work or going to work,” says Wilson.

Wilson says he’s been eating at the stand for the last six years, almost half of his life. And that’s exactly the kind of fixture Orrin Fields wants to be. The Corn Man on Puritan says he wants to craft an experience.

“I want to be the neighborhood icon. Somewhere for them to stop like we had somewhere to stop. I’m bringing back the mom and pop,” says Fields, continuing the rhyme as he shares a laugh with Wilson.

Fields has big plans for the future. He wants to set up a brick-and-mortar shop close by for the winters. In the meantime, you can find him outside behind the grill, shucking corn and holding down the block.

“And we were just driving down Jefferson and just saw this red sign that said ‘Corn Real Good’ and I kind of got a curiosity going on about it,” says Gifford.

Have you ever stopped by to try the Corn Real Good corn? Know of another entrepreneur in Detroit doing something similar with a different food? We want to hear from you. Call 313-403-5747 and leave us a voice message or record a voice memo on your phone and email it to CuriosiD@wdet.org. We might include your comments in a future CuriosiD episode!