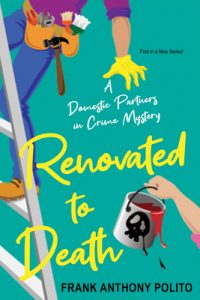 is an award-winning author and playwright from Metro Detroit. His novels include “Remembering Christmas” and “The Spirit of Detroit,” among many others, and his new murder-mystery novel, “Renovated to Death,” is out now.

The premise of the book is loosely based on Polito’s life with his partner, Craig Bentley.

“Right before the pandemic, my editor at Kensington Books called me up and said he had this new idea for a cozy mystery series about a gay couple and thought mine and my partner Craig’s story would be good inspiration and a good jumping-off point,” Polito says.

For the first time in his writing career, Polito decided to set the novel in a fictionalized town with inspiration from his real-life home in Pleasant Ridge.

“So it’s Pleasant Woods, situated between Royal Heights and Fernridge. Keeping in with the cozy mystery, it makes it more fun,” he says.

Polito describes the genre as “family friendly for the most part:” no blood, guts, gore, sex or violence. While there is a death, it doesn’t take place within the narration of the book.

“What I really set out to do was – I didn’t so much want to make a formulaic cozy mystery novel, I wanted to write a Frank Anthony Polito novel the way that I always write them. Same humor, same neurotic narrator, witty banter, clever dialogue and characters, and it just so happens the plot revolves around somebody [who] dies and they have to figure it out.”

In preparation for the book, he watched a lot of “Murder, She Wrote.”

Polito will have a book signing from 6-7 p.m. Tuesday at Pages Bookshop.