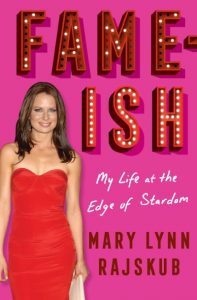 Mary Lynn Rajskub is not necessarily a household name – except maybe for her family and friends across southeast Michigan.  The Trenton native first busted onto TV in HBO’s cult sketch comedy program “Mr. Show with Bob and David.” She then rose to greater recognition playing the weird techie Chloe O’Brien on Fox’s hit show “24.”

Rajskub hasn’t stopped working since, but never achieved that notoriety that comes with steady work in television and movies. Hence the title of her new book. “Fame-ish: My Life at the Edge of Stardom” is out now.

She tells WDET’s Russ McNamara that she enrolled at Detroit’s College for Creative Studies, but something pulled her westward.

Rajskub will be back in Michigan and doing several shows of stand-up at Mark Ridley’s Comedy Castle Aug. 11-13.

Listen: Mary Lynn Rajskub details her life on the fringes of Hollywood in her new book, “Fame-ish: My Life at the Edge of Stardom.”