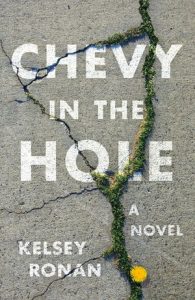 The Midwest is filled with communities where people are trying to do more with less. Divestment, crumbling infrastructure and shrinking populations have been common in areas, but that doesn’t mean the people living in such places hate their lives or their city.

Flint, Michigan author Kelsey Ronan has watched as her city has been captured in ways that often over simplify and distort the real people that live there. She recently wrote a novel, entitled “Chevy in the Hole,” attempting to harness the nuances behind the residents of Flint.

“It was grief both for my partner who had passed but also for what, you know in real time, I was witnessing my hometown go through.” — Kelsey Ronan, author of “Chevy in the Hole.”

Listen: The inspiration behind the novel “Chevy in the Hole”

Kelsey Ronan is the author of “Chevy in the Hole.” Ronan said her book was influenced, in part, by her partner who died of an overdose a number of years ago.

“It was grief both for my partner who had passed, says Ronan, “but also for what, you know in real time, I was witnessing my hometown go through.”