Maria Walkenbach lives with her four dogs, just around the corner from the construction site of the Gordie Howe International Bridge. She’s been here for almost 20 years in the home she inherited from her mother-in-law.

“My husband actually passed away in this home. So there’s a lot of memories in this home. And now that I’m looking to retire in another year or two I want to start fresh,” she said.

That’s why she signed up to participate in the first round of the city’s Home Swap program. She’ll be able to trade in her home for city-owned property in another neighborhood. 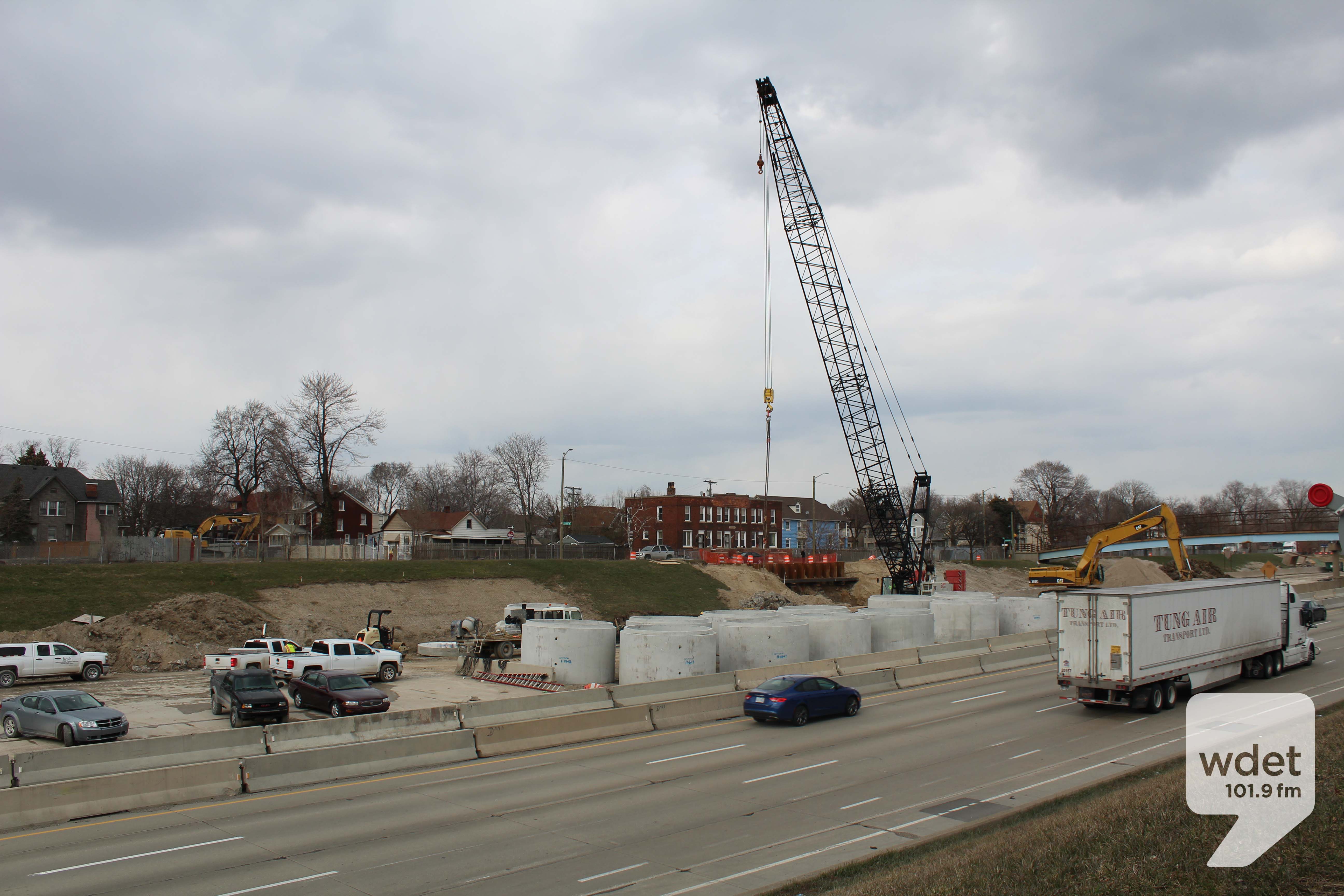 Construction began this year in Detroit for the Gordie Howe International Bridge that will run to Windsor, Canada. 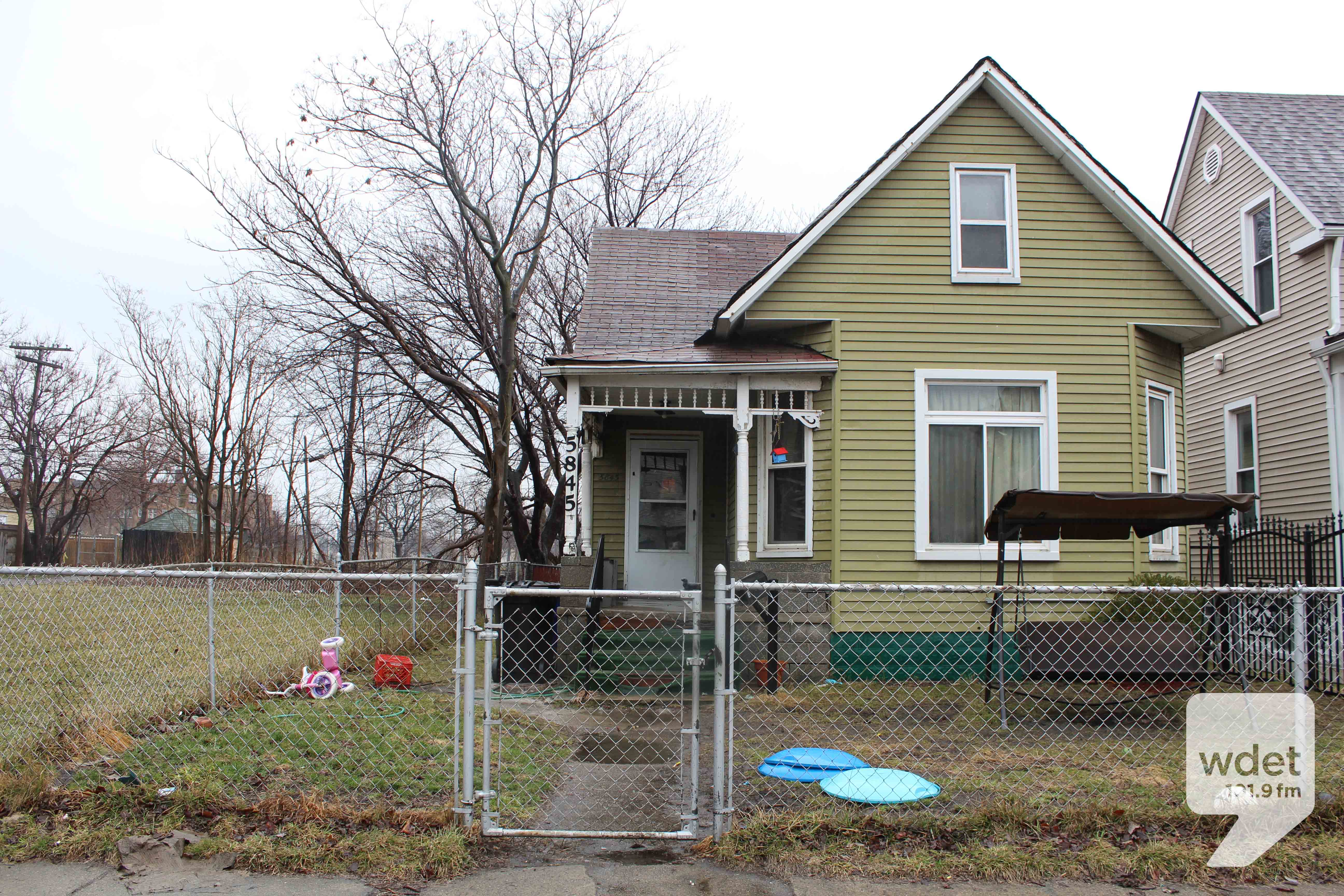 Located just around the corner from the construction is Maria Walkenbach’s home. Walkenbach has lived here, in the home she inherited from her mother-in-law, for almost 20 years. 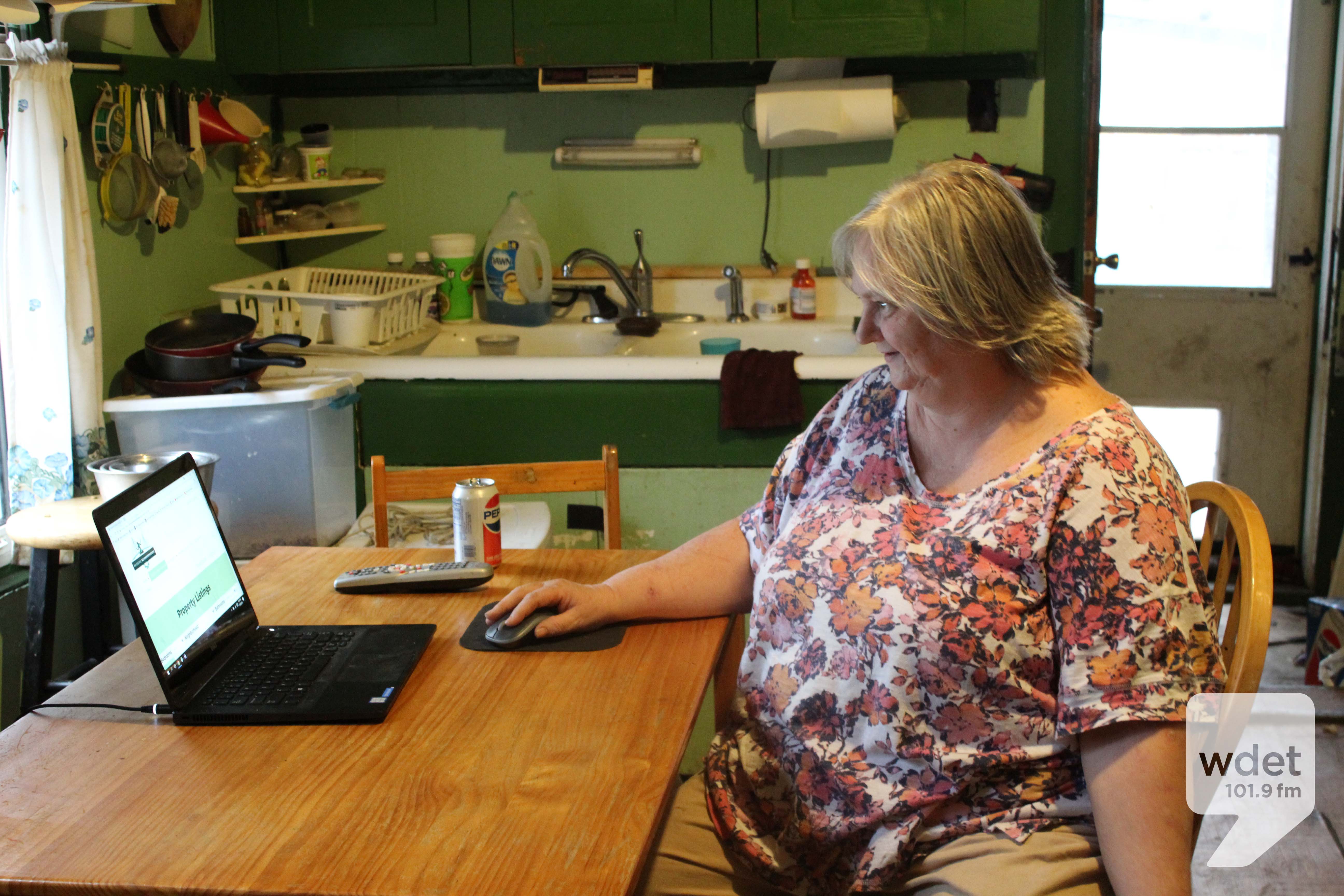 Walkenbach is eligible for the city of Detroit’s Home Swap program. It will allow her to trade-in her current home for a city-owned property in another neighborhood. Here, she logs onto a website to see the available houses. 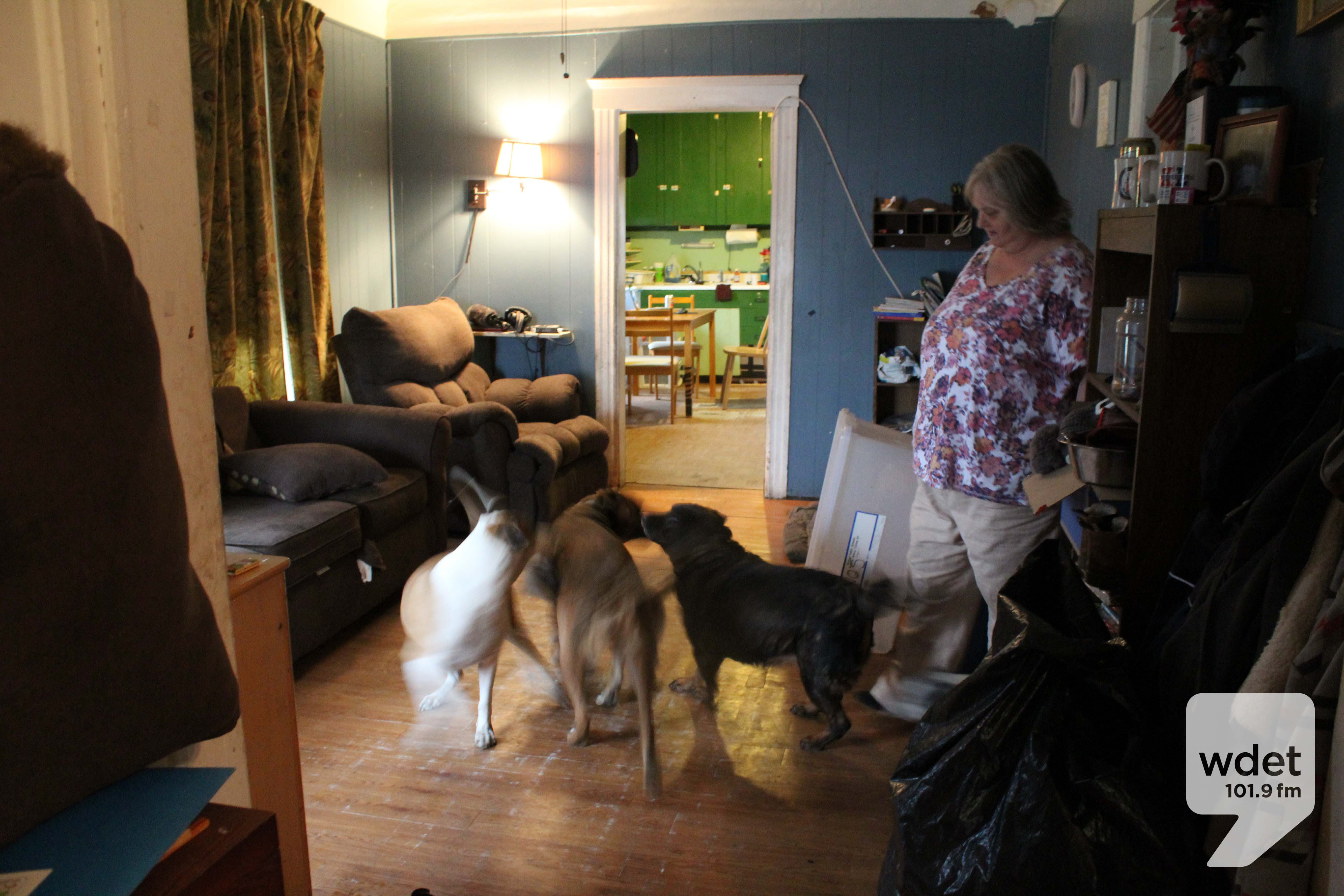 Walkenbach lives alone with her four dogs. “My husband actually passed away in this home. So there’s a lot of memories in this home. And now that I’m looking to retire in another year or two I want to start fresh,” she said. 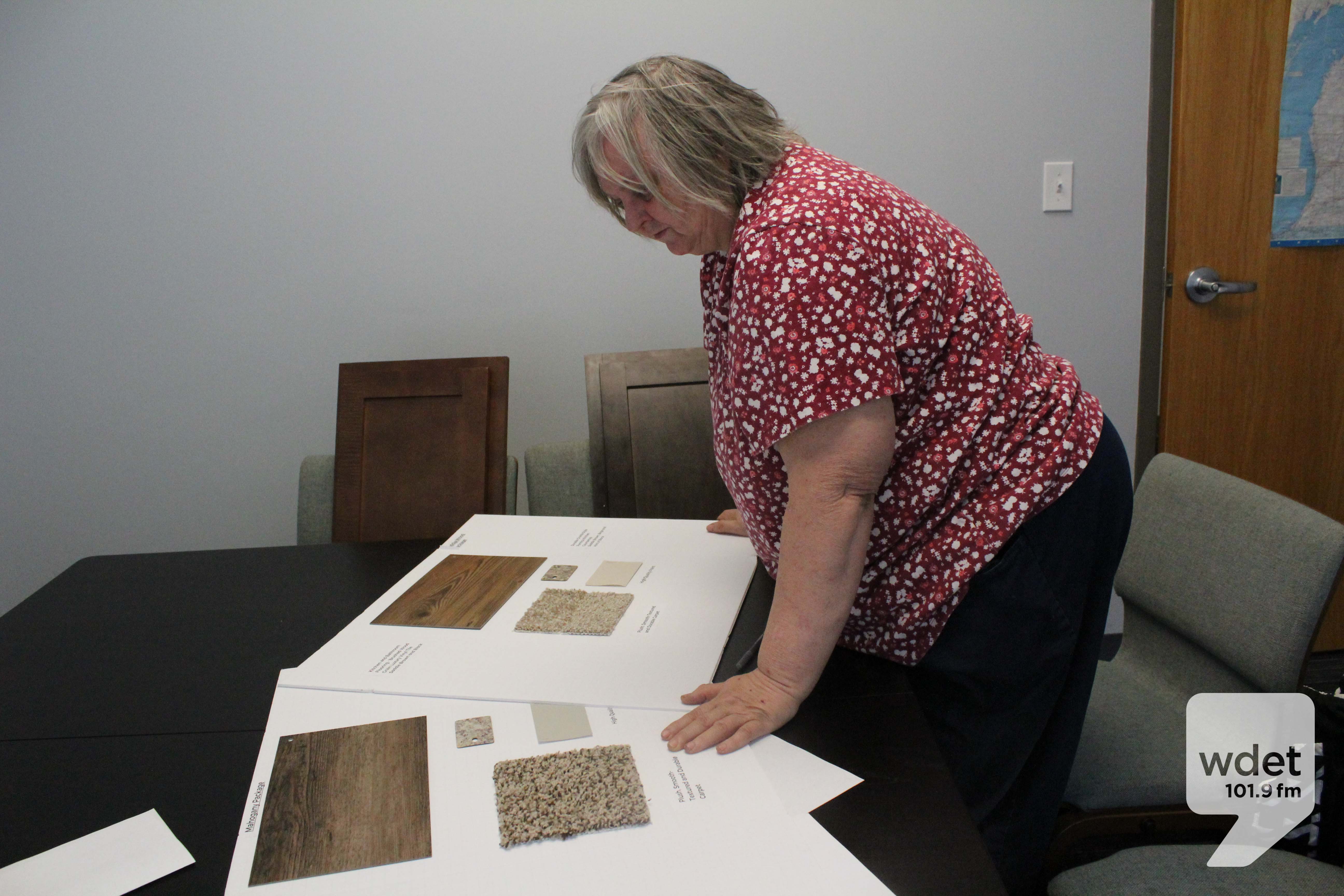 The city allows Home Swap participants like Walkenbach to choose between two decorating schemes. She chooses the one with the speckled carpet. 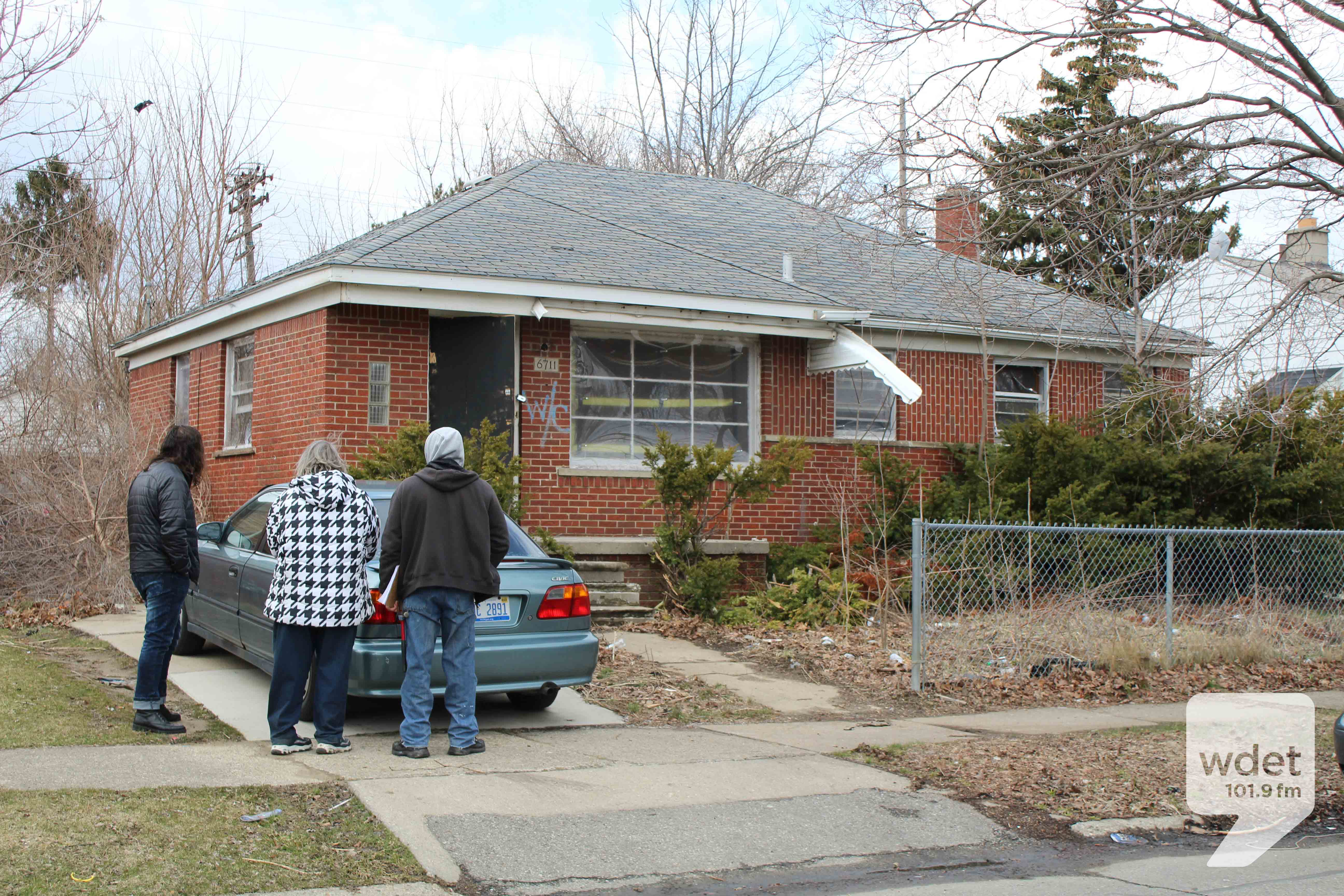 The city notified Walkenbach that she got the three-bedroom ranch she’d been eyeing. Here she is going on a walk-through with two city employees before signing the papers to initiate the swap. 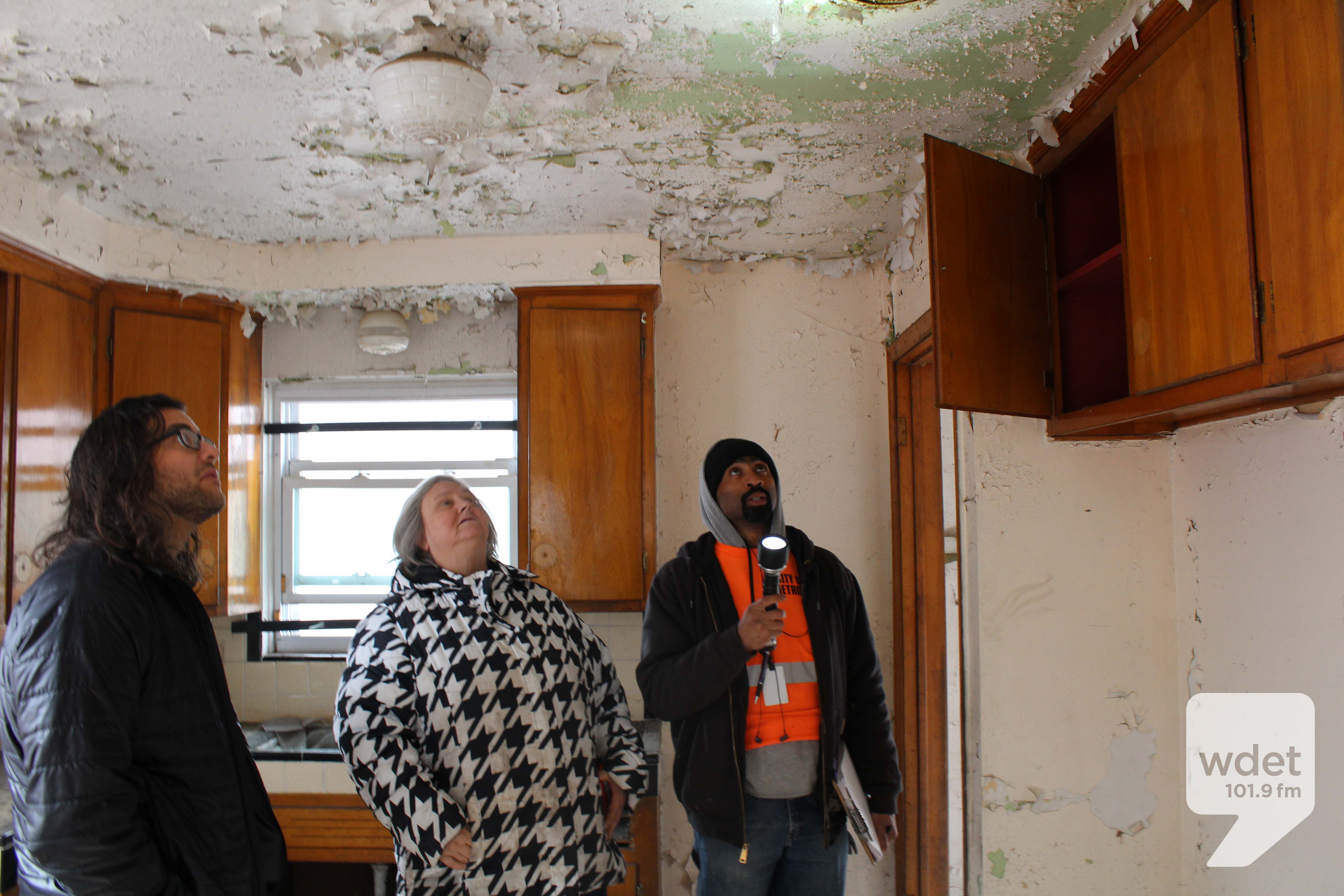 The house was acquired by the city of Detroit after former residents stopped paying their property taxes. As part of the Home Swap program, the city will pay up to $75,000 in renovations. 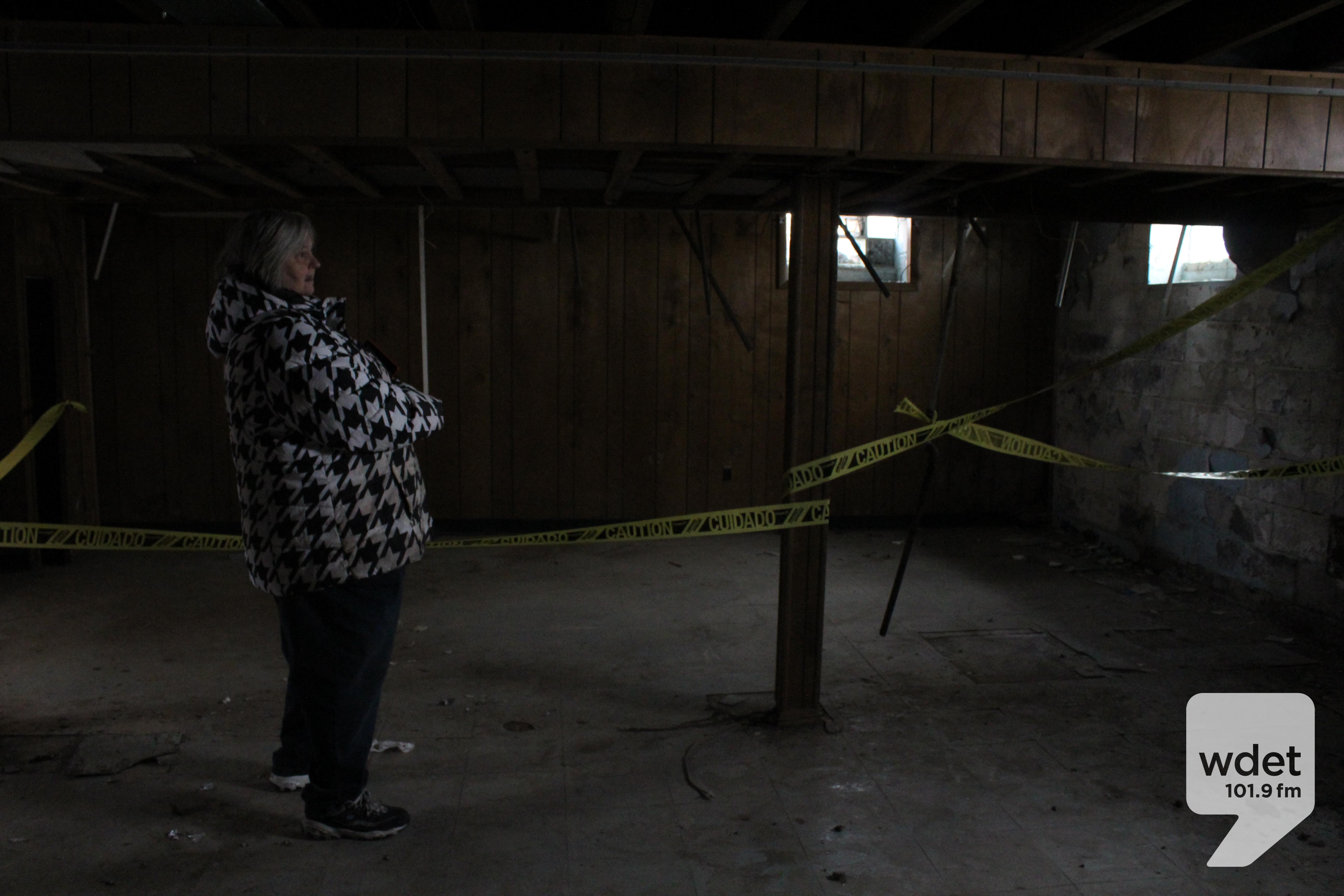 Walkenbach, who loves to swim, has plans to put an above-ground pool in her new basement in the winter. 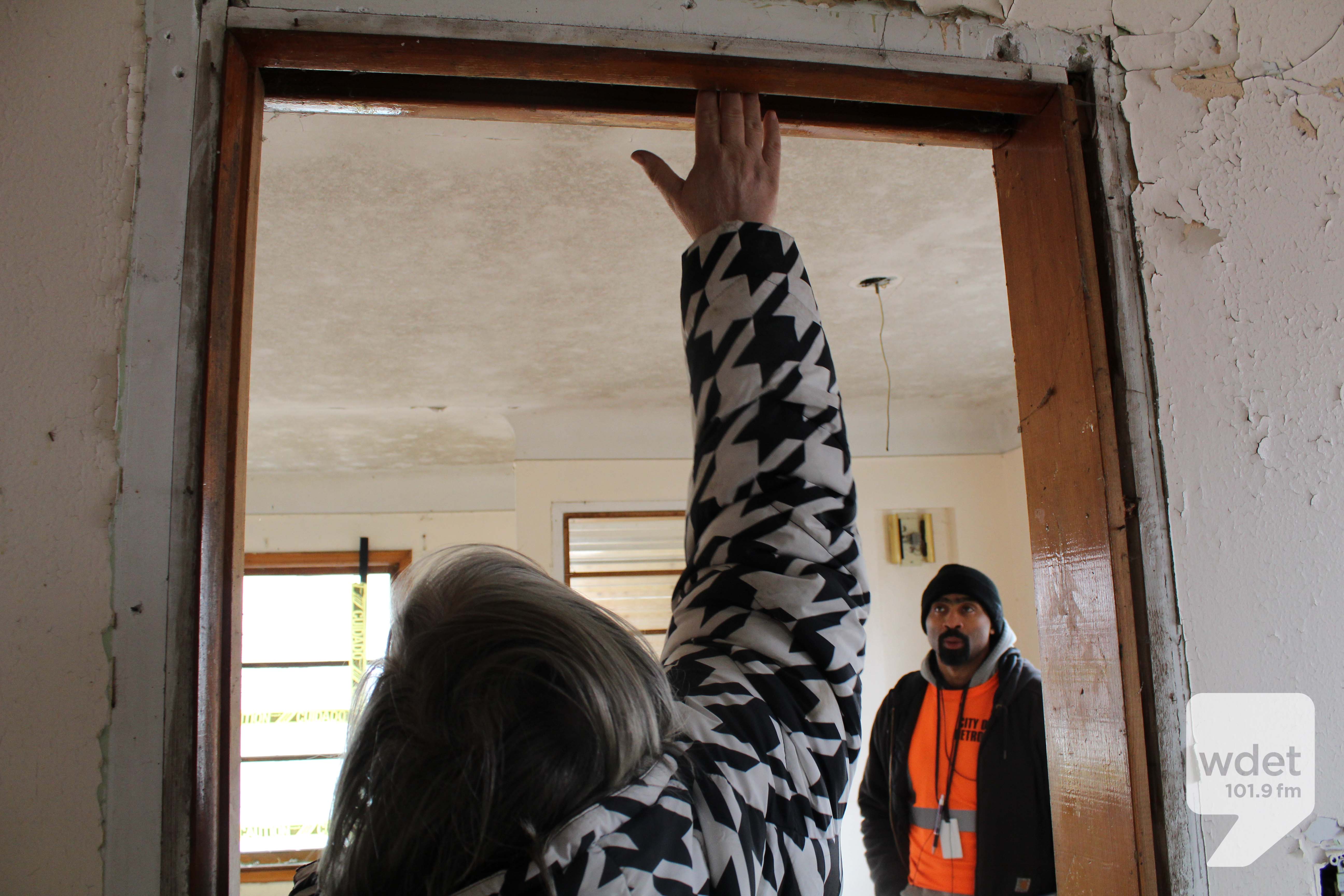 Walkenbach discovers a pocket door between her kitchen and her living room. “It still works!” 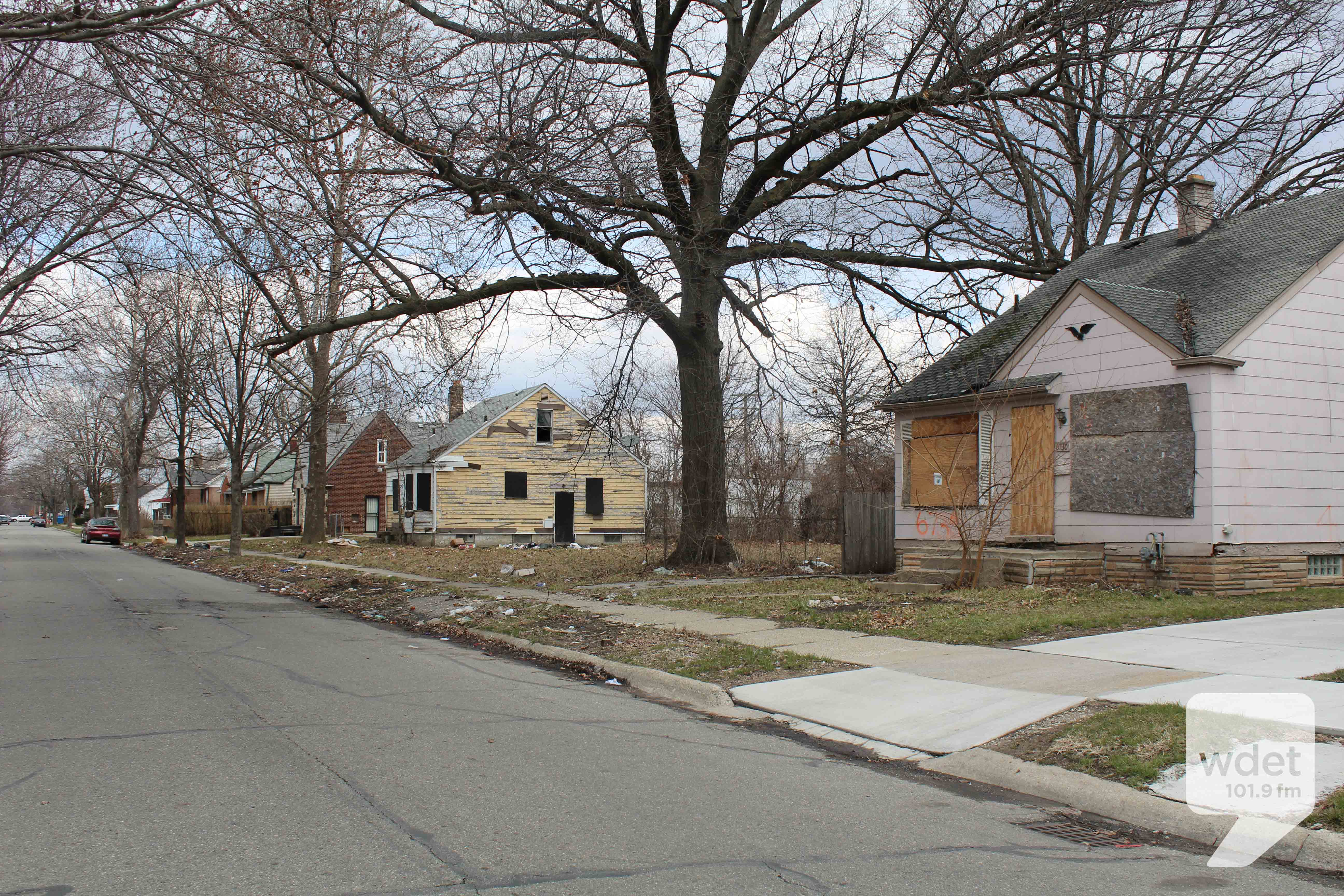 Oustide, some of the houses on her new street are abandoned but Walkenbach is enthusiastic about the neighbors she’s already met. 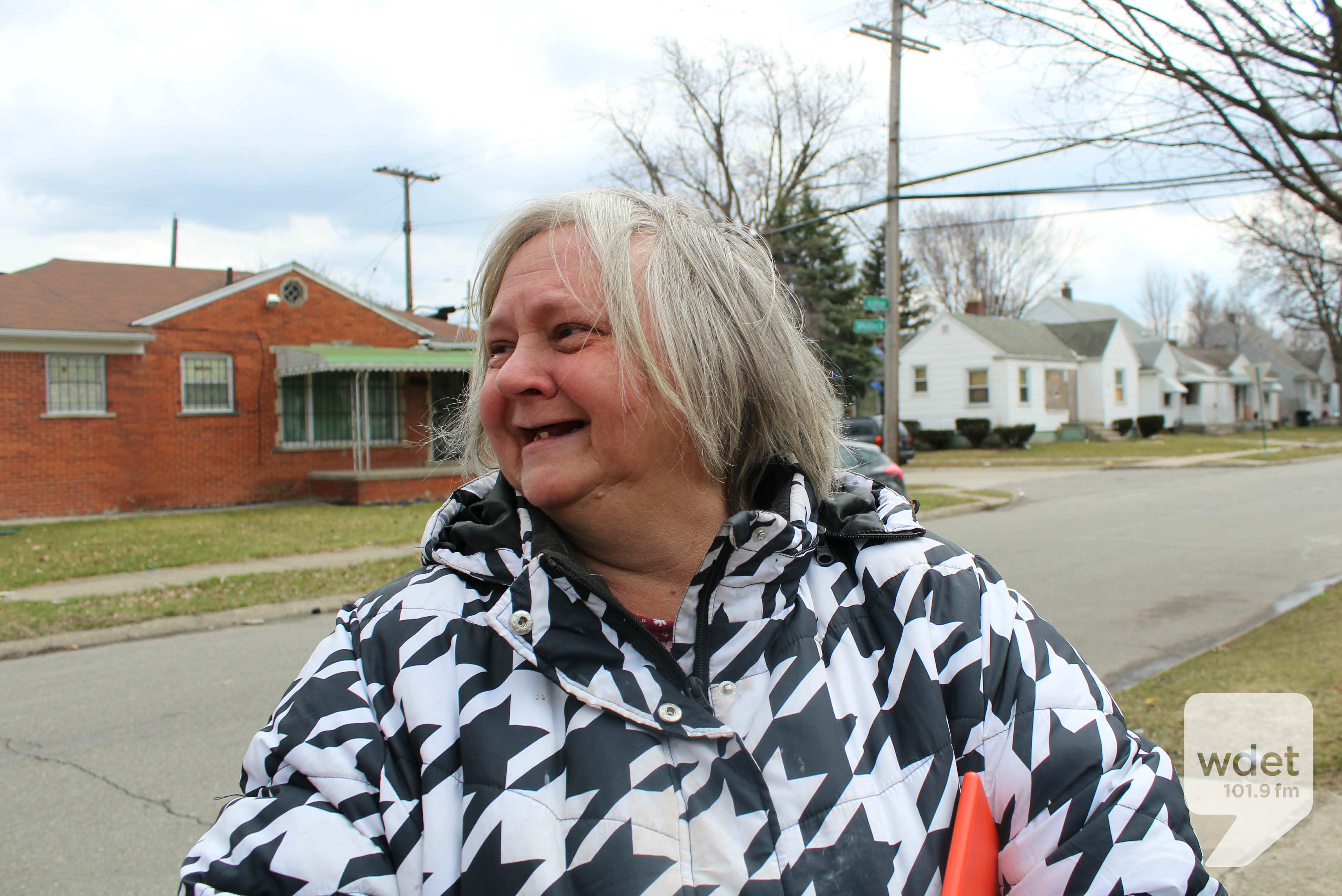 Walkenbach said, “Just the thought of getting a house is unbelievable.”

Hover at the bottom of the photos to see captions.

After logging into the members-only page on the city of Detroit’s Bridging Neighborhoods website, Walkenbach scrolled down through photos of 10 homes the city acquired after their previous owners stopped paying taxes. The houses look dilapidated but the city will spend up to $75,000 renovating them in exchange for eligible homes like Walkenbach’s., was eyeing a little brick one over in the Warrendale neighborhood on the city’s west side.

“It's a three-bedroom, one-bath, home,” she said. “And I love it because it has a humungous backyard with two trees my grand boys can climb.”

Walkenbach has this opportunity because of a benefits agreement that was lobbied for by people living near the bridge site. A community advisory group convinced the state of Michigan and Windsor to create job training, health monitoring and home improvement options like Home Swap to compensate for the impacts of the construction. Bridging Neighborhoods Director Charity Dean said these benefits are being paid for by the sale of city-owned land that the state needed in order to build the bridge.

“The city was originally offered a couple hundred thousand dollars for the land and the mayor turned that into a $45 million package,” said Dean.

About $33 million of that went to the Bridging Neighborhoods program that Home Swap is a part of. Residents fought for it so there’d be an option for people who didn’t lose their homes to eminent domain but who didn’t want to stay in the increasingly industrialized area.

Rather than give participants cash to move wherever they want, the program is designed so that participants can exchange their current homes for select ones in other Detroit neighborhoods. For the program's first round, the city offered homes in Warrendale, Morningside and Springwells.

In order to participate, residents must possess the deed to their current home and be up to date on their water bills and property taxes.

“Ostensibly those are reasonable requirements but it’s just complicated,” said Michele Oberholtzer, director of the Tax Foreclosure Prevention Project at the local non-profit United Community Housing Coalition. “It’s difficult to get someone to pay out for something that they’re then going to leave behind.”

Related Story:  Is the Tax Foreclosure Process Good for Wayne County but Bad for Detroit?

Oberholtzer said initially several interested families were ineligible for the program. Since then, most of those families have resolved their tax and water bill issues but Oberholtzer said she hopes the city will work to find solutions for those who haven’t.

But even some families that are up-to-date with their tax and water bills are running into problems with Home Swap. Take for example Maira Franco, one of Walkenbach’s neighbors.

Franco’s family of six lives so close to the construction that Franco said the house shakes from the ongoing work. She pointed to new cracks in the wood over her stairs and a gap between where her tile floor ends and a wall begins. She believes this damage came from the construction.

Franco has asthma, and she wants to get out of the house as soon as possible. She qualified for the Home Swap program but said when she looked at the 10 houses the city made available in the first round, none of them were big enough for herself, her husband and her four children. Her teenage son, Javier, translated her Spanish into English:

“She said that she can’t pick a bigger house because they told her that they can’t fix it because they don’t have enough money.”

Renovating a five-bedroom house like their current home could cost more than the $75,000 cap the city has in its renovation budget for Home Swap. But, Franco said, she’ll be looking out for a four-bedroom in the next round that’s slated to happen in May.

For Walkenbach, however, the houses in the first round offered plenty of space. That’s why she was so excited when she found out she was granted the three-bedroom ranch she’d been eyeing.

In early April she went on the final-walk through before signing the papers to initiate the swap. Walkenbach couldn’t contain her excitement.

“My home!” she shouted when she first got inside.

There was caution tape over the windows, paint chips hanging from the ceiling, and a hole in a wall. But Bridging Neighborhoods Housing Development Specialist Antoine Hayes told Walkenbach, “When you come back and it’s all renovated in here, you’re probably going to cry.”

Walkenbach teared up and said, “Just the thought of getting a house is unbelievable. See, you got me crying now.”

The renovations are supposed to take 6-9 months. After Walkenbach moves in, her home near the bridge is scheduled to be demolished.

What About Those Who Stay?

The city hopes to recruit and relocate more than 200 of the 300 homeowners living in the program area.

She said the Detroit Planning and Development Department is going to be doing a study with the community, likely at the end of this year.

VIDEO PRODUCED BY WDET IN 2014

The bridge could be complete as early as 2022.

A version of this story was originally produced by WDET Reporter Laura Herberg for Marketplace. You can check out that story here.