Detroit has the most people living in poverty, as defined by the federal poverty threshold, among the nation’s 20 biggest cities. The metro region and the state of Michigan are slightly ahead of the national rate as well.

Erica Raleigh, director of Data Driven Detroit, talked with WDET’s Sandra Svoboda about some of the data available on poverty in the region. You can listen at the link above or read the transcript here:

How do you define poverty from a data perspective?

So poverty rate is kind of the most basic. It’s that number that we often hear, like the child poverty rate in Detroit is 59 percent. And we can know that rate because of poverty thresholds, another definition, and these are determined by the Census bureau. So depending on family size and number of children there are different levels of annual income that are set as thresholds below which a person or family is said to be living below the poverty line.

So give us some examples of poverty thresholds for different kinds of households.

It’s often said Detroit is a poor city or has a large percentage of households in poverty or low-income households. What do the data show about Detroit and the income level of its households?

In terms of percent of the population that’s living in poverty in Detroit, we’re at about 41 percent, meaning that 41 percent of our people living in Detroit, our Detroit residents, are living below the poverty thresholds as set by the Census Bureau.

How does the rest of southeast Michigan compare with its poverty rate?

So as I mentioned, Detroit has a 41 percent poverty rate. Our region as a whole is about 17 percent. Pretty comparable with the state of Michigan.

Nationally we’re at about 16 percent.

So we’re a little bit higher than that.

But not too much higher.

And what does the Census Bureau use to set that poverty threshold number?

It’s actually a really interesting story and there are lots of details in there. There was this great researcher named Mollie Orshansky back in the early 1960s who used the results from a 1955 survey showing that families typically spend about one third of their income on food. So she took that result and the USDA’s economy food plan which kind of tells you how much food costs and multiplied that number by three to determine a threshold. Then of course based on different family sizes and number of children, there’s this complex matrix. But that’s the basic gist. We’ve really been using pretty much the same formula with one tiny tweak since 1963. 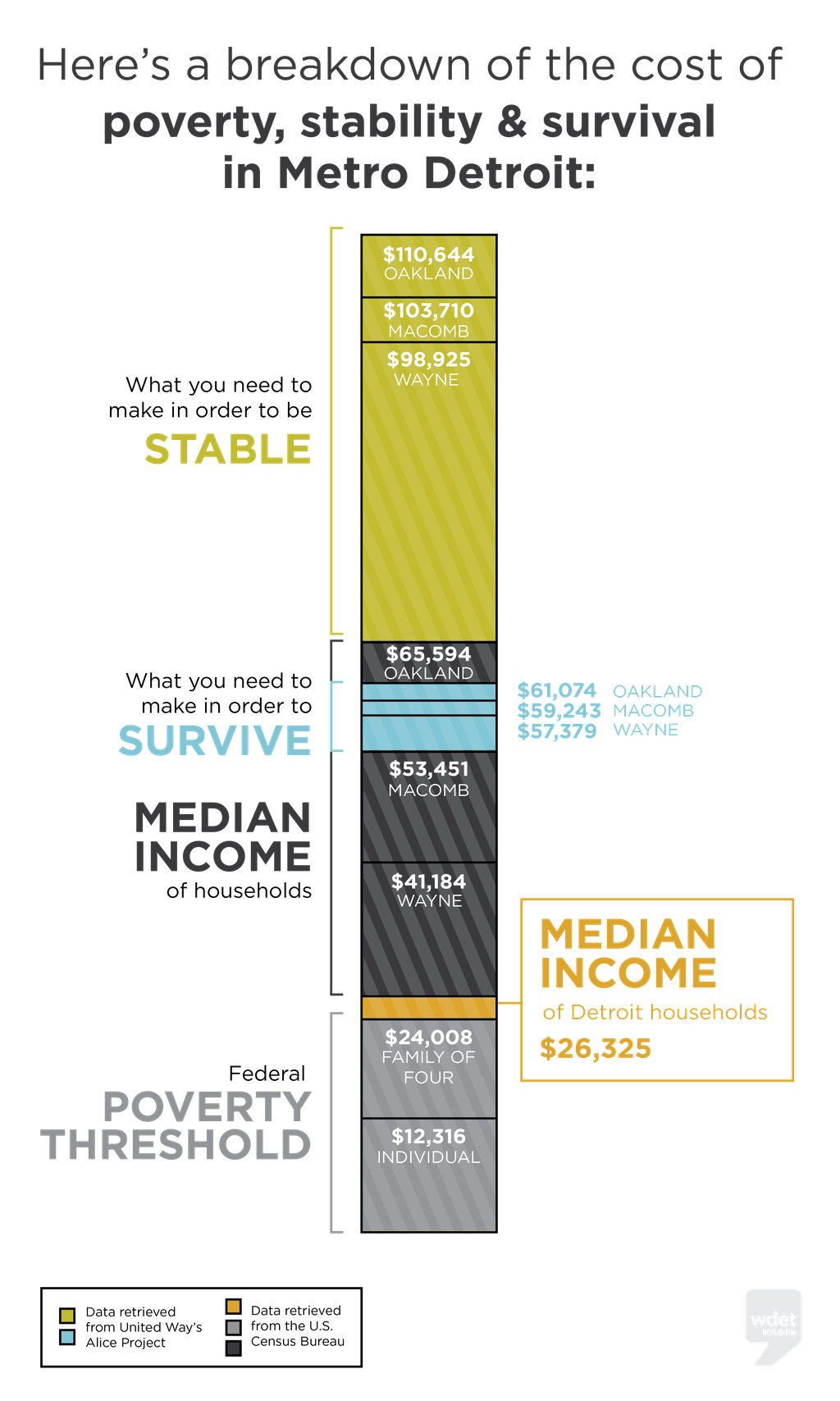 So the poverty threshold is simply based on food prices. It doesn’t account for variations in say cost of housing or transportation or child care or health care or education or some of the other big household budget items.

That is absolutely correct. This is a big limitation of this poverty threshold official statistic. It doesn’t include cost of living. There’s no geographic variation in this measure. The same poverty thresholds are used for anywhere in the 48 contiguous United States. So there’s no geographic variation, it’s really only accounting for that food cost and it’s accounting for the food cost that was coming from a survey back in 1955.

Of course we’ve adjusted for price changes over time but in terms of the actual expenditures by households on different sort of segments of life, right, housing transportation, food, all of that, we’ve actually changed our patterns in the United States over the last many, many decades. We’ve been using the same calculation for 50 years.

Just for one quick example, American households in 1930 spent about 8 percent of their income on transportation. Today the average household spends about 17 percent. That’s a dramatic change, and we haven’t accounted for those differing proportions of income being spent on different segments of life that are very important.

Is there an advocacy effort to get the poverty guideline changed, the threshold changed to be not just based on food prices but on other actual expenditures in households?

Yeah, there are many different efforts underway. You can find a whole bunch of resources on alternative measures of poverty on the Census Bureau’s website. There’s also a really great one, I think you had them on a few weeks back, the ALICE report that was produced for Michigan and several other states around the country. That’s the Asset-Limited, Income-Constrained Employed households and that measure actually does account for things like housing and child care and health care, a whole lot of really important things that we spend our money on as households. Again though I think it’s really important to think about not just what is a basic survival level for our community but really what does it take to thrive as a community, as a population. And I just think it’s really important to think more about that. Data can’t capture all of that, right? Numbers can’t tell us the whole human experience.