When you look inside your medicine cabinet, you’ll likely see an assortment of prescriptions, supplements, topical creams, toothpaste and many similar products. Some of those substances are plant based, but others? Not so much. 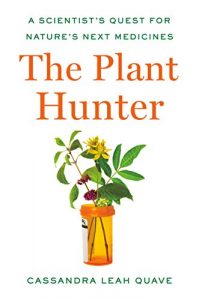 That’s a change from the past thousands of years, when nearly every medicinal product used by humans came from plants, flowers, roots and tree bark. Now, there’s still plenty of plant-based products we use today, but increasingly, many would argue that we’re losing a healthy connection to the natural world. And that comes at a hefty cost, according to Dr. Cassandra Quave.

Quave has studied the medicinal potential of plants for decades. She’s an ethnobotanist with Emory University and the author of a new memoir, “The Plant Hunter.” She spoke with CultureShift about the findings of some of her research.

She says that by destroying natural habitats in the Amazon and other biodiverse areas globally, we’re losing out on the opportunity to discover new life-saving medicines needed in the fight against the greatest medical challenge of the 21st century: the rise of the post-antibiotic era.

“We’re really exploring a new frontier because most of these species have never been studied under the lens of science and there’s an incredible amount of really interesting things out there to discover.” — Dr. Cassandra Quave

Listen: Ethnobotanist talks about the vital need to protect Earth’s natural spaces before it’s too late.