Researchers at the University of Michigan say urban gardens in Detroit don’t necessarily lead to gentrification. But they are concerned about where the gardens are and how they affect people who live around them.

“The folks who are the most qualified to be expanding equitable access to urban gardening in Detroit are the folks who have lived here for a really long time.” —Jason Hawes on the impact of urban gardens in Detroit

The findings appear in the September issue of Landscape and Urban Planning. 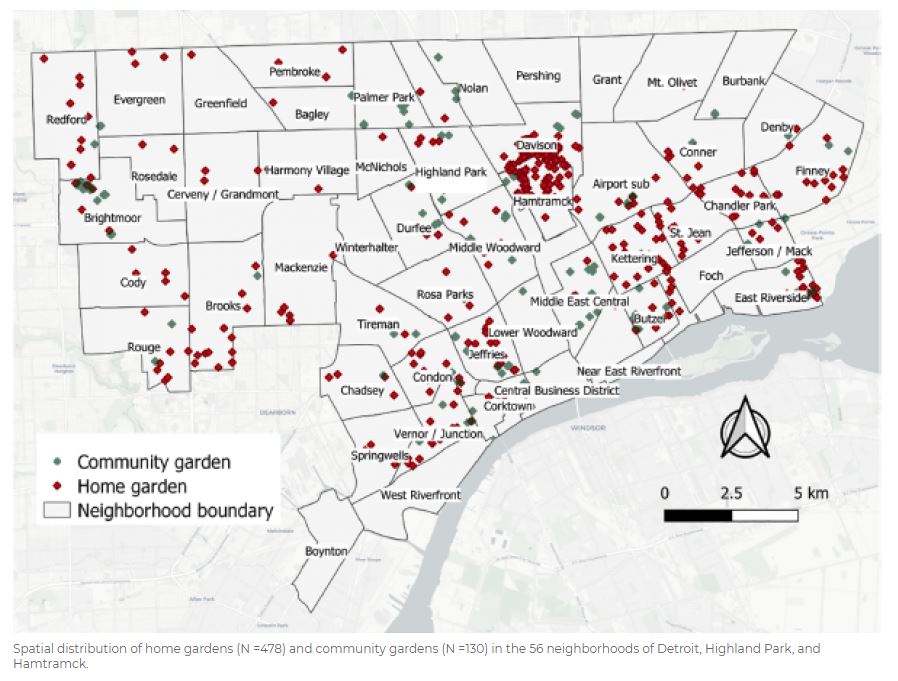 “But they’re clustered together in areas where folks are a little bit wealthier, a little bit more well-educated, and in places with fewer Black communities,” Hawes says. “And in a predominantly Black city, that’s a really big deal.”

The study says that while urban gardens offer many benefits, they’re unequally distributed. That surprised Hawes and his colleagues because Black Detroiters have led the urban gardening movement.

“You would think it it’s going to be more popular in Black communities because these are Black-led nonprofits that are dominating this work,” he says.

How to make urban gardening more equitable in Detroit

Despite the uneven distribution of home and community gardens, the study did not find evidence that they led to gentrification. Hawes says property values across the city are neither stable enough nor high enough to be affected by urban gardens. Instead, what they’re seeing is that as new folks come to town who are attracted to urban gardening, they’re reshaping the landscape by building new gardens, but not necessarily displacing people in communities that already had gardens.

“There’s lots of space available, and they’re sort of building their own and reshaping the landscape instead of taking over what was already there,” Hawes says.

The report offers a couple of recommendations for making urban gardening more equitable in Detroit. Hawes says the first is to take the findings as a warning sign.

“Activists and nonprofit groups have been saying for a long time that co-opting Black narratives and Black labor could result in a more unequal Detroit,” he says.

The second recommendation is to empower Black individuals and groups to plant more gardens.

“The folks who are the most qualified to be expanding equitable access to urban gardening in Detroit are the folks who have lived here for a really long time,” Hawes says. “Those are the groups that can make community gardening work for people.”