Begum was born in Bangladesh and moved to the United States in 1998. Her father was a pharmacist who wanted his kids to have a better future.

“We were in a decent-sized family. So it was a little bit hard financially for my father to … support family. Even though there was opportunity for us to work, my father always emphasized going to school and finishing up our education.”

She grew up in Detroit. Begum says it was hard to settle in due to in part the language barrier. However, she overcame her challenges by taking challenging courses in school. After completing high school, she decided she wanted to pursue a career in the medical field. She decided to follow her father’s footsteps as a community pharmacist.

“Given my father’s background I grew up seeing how he helped people. So I had firsthand experience with that. And I just followed along with that.”

In 2013, Begum and her co-owner Mahbubur Motlib opened Community Rx Pharmacy in Warren, when they noticed Bangladeshi families were moving into Warren and nearby suburbs.

“We don’t have a Bengali-speaking pharmacy in this location … We wanted to be with the community. That’s why the name community came from, we want to be with the people, be their support center Resource Center for them.”

They started serving family and friends. Then the business grew.

“Just by word-of-mouth we have gained different ethnic people that are coming to our pharmacy.” 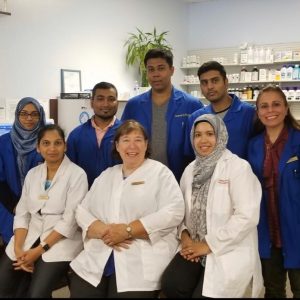 Begum says being a Bangladeshi businesswoman means a lot to her.

“I want to be with people and the newcomers who don’t understand the medication, who are who feel like they’re lost, you know, in the health care system … So for me to be able to be a resource center for them an easy access for my patients, I love that.”

She hopes to expand her business to include bilingual medical education classes for the community.

“Pharmacy isn’t just pill counting and putting medication in the bottle. It’s more than that. I learned that I want to be able to apply that in my practice … immunization, medication therapy management, there’s so many various programs like the diabetic classes, consultation, consultations, I want to be able to implement all that into my practice.”

Tania Begum was interviewed by Nargis Rahman as part of the South Asian American Digital Archive (SAADA)  fellowship project about Bangladeshi Women Entrepreneurs in Metro Detroit. Listen to the full stories at saada.org, or on the Bengalis of New York podcast here.