Detroit City Council is rolling out new guidelines for licensing recreational marijuana stores, the city’s second attempt at drafting an equity-based framework for cannabis business licensing. A federal judge blocked a previous ordinance that pushed most licenses toward legacy Detroiters. The new legislation changes that and creates a new pathway based on the Michigan Marijuana Regulatory Agency’s definition of social equity.

“We believe that it’s a much safer, much more potent argument legally if we focus solely on equity applicants as opposed to legacy Detroiters,” says Detroit City Council President Pro Tem James Tate, who authored the proposed ordinance. 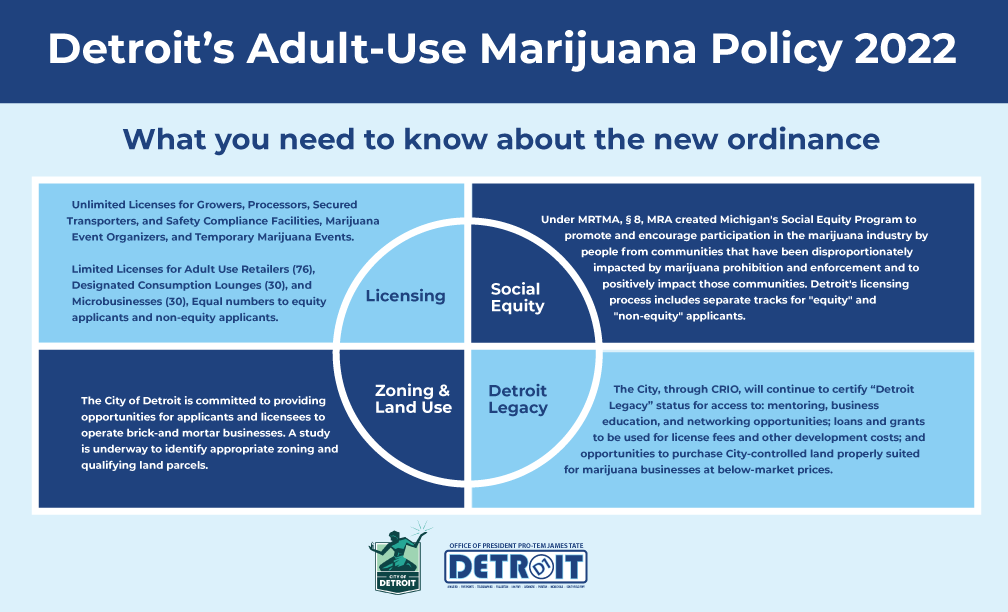 Tate’s plan creates a scorecard to manage the limited number of permits for some marijuana-related businesses. Detroit would have 76 licenses for dispensaries and 30 permits for both microbusinesses and designated consumption lounges. There are unlimited licenses for growers, processors, transporters, safety compliance facilities and temporary events. The city’s civil rights department will judge applicants based on their business plans and community outreach.

“We did that purposely because we did not want equity applicants to end up having to compete for these licenses with individuals who are more well-funded and definitely more well-connected,” says Tate.

The new framework creates two pipelines for potential cannabis entrepreneurs — one for those using Michigan’s social equity program and one for everybody else. The state Marijuana Regulatory Agency’s criteria includes past marijuana convictions and residency in areas with high poverty levels.

“We had an opportunity to look at what we did the first time around and we wanted to make it better,” Tate says. 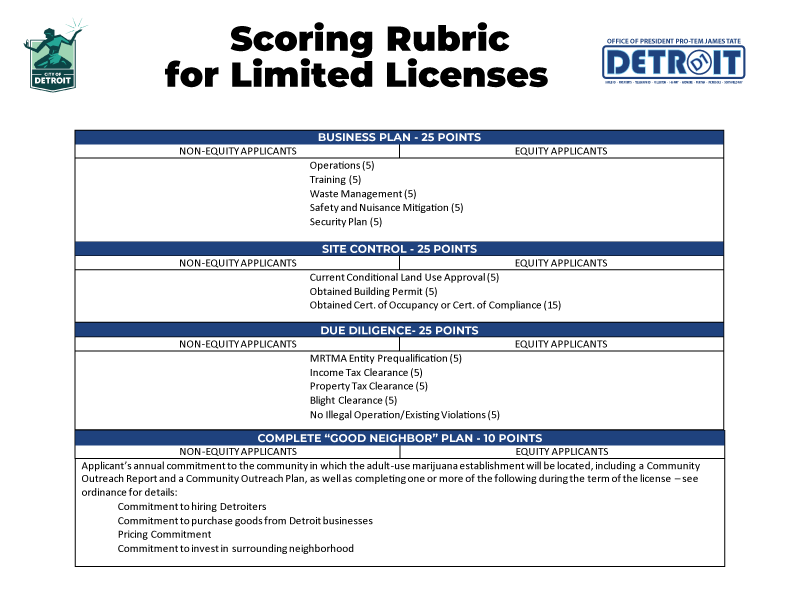 In 2021, U.S. District Judge Bernard Friedman stopped previous legislation that prioritized longtime Detroit residents after it was challenged by someone who did qualify under the Detroit Legacy program. Friedman called the ordinance “unfair” and “protectionist.”

“It is also irrational to grant the preference to residents of Detroit but deny it to those of other communities, such as neighboring River Rouge, when residents of both cities presumably suffered from the War on Drugs to the same extent,” Friedman wrote in his opinion.

The move thwarted aspects of the Detroit Legacy program, which gave certain benefits to Detroit residents who had lived in the city for more than 10 years, with bonuses for low-income applicants and those who had previous marijuana-related convictions. The city also set aside half of its business permits for certified Legacy Detroiters, giving other discounts on licensing fees and the purchasing of city-owned land.

City officials say the new ordinance would do away with the licensing benefits for longtime residents. However, the Detroit Legacy program will still provide business support to those who have lived in the city for more than 10 years.

“We have been able to provide programming, resources and technical assistance for over 800 potential cannabis entrepreneurs,” says Detroit’s Director of Marijuana Ventures Megan Moslimani.

Tate’s plan has the backing of Mayor Mike Duggan.

“I have said from the beginning that I would not support a recreational marijuana ordinance that would systematically exclude our residents and those who have been most negatively impacted by past marijuana laws from participating in the industry,” Duggan wrote in a statement. “Councilmember Tate deserves a great deal of credit for his work in developing a revised ordinance, which we believe meets the goal of ensuring equitable access to this potential new industry for all, including Detroiters.”