A new report says about a third of children under age 5 in Michigan qualify for child care subsidies.

But only about 5% receive them.

There are lots of kids out there who need this help, but accessing it is the issue.” —Nushrat Rahman, Bridge Detroit and Detroit Free Press journalist

The Michigan League for Public Policy and Kids Count Michigan studied the issue. They estimate almost half of the state’s residents live in places where licensed child care is scarce.

Journalist Nushrat Rahman writes for the Detroit Free Press and Bridge Detroit. She says the problem is a lack of access to child care.

“This really affects a family’s economic security,” she says. “It affects a child’s future and their academic success, so it really has long-lasting consequences.” 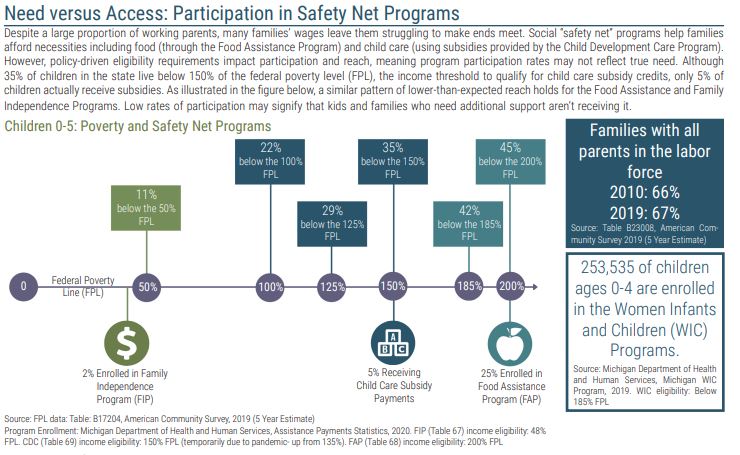 Rahman says another problem is a lack of access to food.

“Nearly 50% of young children in Michigan were eligible for food assistance benefits, but only a quarter were enrolled to get that support,” she says.

In 2021, Michigan announced plans to use $1.4 billion in federal pandemic relief to expand child care and make it more affordable. It raised the income eligibility requirement from 150% of the federal poverty level to 185%. But that’s only through 2023.

Rahman listened to experts who say those temporary measures should continue beyond the COVID-19 pandemic.

The report also found that 11% of children under 5 qualify for cash assistance. But only 2% received it.

“It just really illustrates the fact that there are lots of little kids out there who need this help, but accessing it is the issue,” Rahman says.

The Kids Count report found that the rate of children ages 0-5 living in poverty statewide varies by race. More than 40% of Black or African American children in Michigan lived in poverty, compared with less than 20% of white children. The Native Hawaiian or Pacific Islander group had the highest rate. Asian children had the lowest rate.