Detroit’s North American International Auto Show (NAIAS) opens this weekend at Huntington Place for the first time in over three years. It marks the long-anticipated debut of the event’s summer format.

A lot has changed since the city’s last auto show in January 2019, but there are some familiar festivities, like the dramatic vehicle unveilings.

The seventh generation Ford Mustang and the final edition of the Chrysler 300 were both revealed this week. Futuristic concept cars like the Buick Wildcat are also on display.

Listen: A look inside the 2022 Detroit Auto Show

New for this year are test tracks that attendees can ride on in the latest trucks and SUVs.

That includes a Jeep off-road course, featuring a roughly two-story tall hill with a steep drop. It’s where Jeep driver Zack Castles shows off the braking power of the Jeep Wrangler Rubicon 4xe.

“I’m gonna stop right here at 40 degrees,” Castles explains. “Realistically we could put the vehicle in park if we wanted to.” 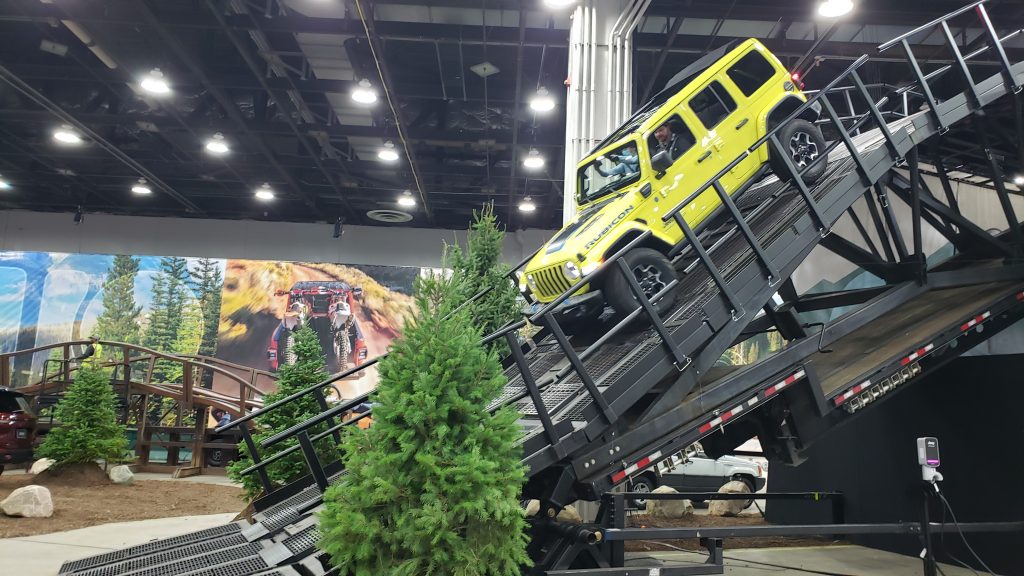 At the bottom of the hill, Castles drives over about a dozen concrete stairs. It’s an obstacle the average motorist might face — if you park your car on a front porch.

At the Ford display, Dave Marchioni is taking people for rides in one of the hottest new vehicles — the F-150 Lightning EV pickup.

“I love the ride-alongs,” says Marchioni. “We’ve been fortunate to have a bunch of people that were suppliers or have worked on the vehicles, that have actually gotten a chance to ride in them.”

The test tracks are the fulfillment of an idea auto show organizers said could be possible by moving the event to the warm weather season.

But the elephant in the room is the cars that aren’t in the room. These test tracks are setup indoors because fewer vehicles are on the show floor compared to year’s past.

President Joe Biden, who is a self-proclaimed “car guy,” and U.S. Transportation Secretary Pete Buttigieg, were both at the auto show Wednesday during media day. Marchioni says he gave Buttigieg a ride in the F-150 Lightning.

“It was very nice to have him in the truck,” Marchioni says. “I got to startle him a little bit with some torque.”

Oakland County Executive Dave Coulter was also in attendance, networking with industry officials who he says have a big footprint in his region.

“And so our economic development folks are down here meeting with those businesses, meeting with suppliers, and making sure that they know we’re here to support them,” says Coulter.

The Future is Mobility

One thing was abundantly clear at the reformatted auto show: it’s all about mobility — whether or not it’s on four wheels.

Mobility startups and projects take up as much of the floor space as traditional auto manufacturers. Everything from charging stations, to EV integrated phone apps, as well as electric drones can be found in the exhibition.

Peterson believes Sigma-6 could be used to help fight wildfires, move cargo, or even transport people.

“With the population growth that’s taking place, our highways are just becoming more and more congested. And there is no congestion in space,” Peterson says.

Peterson’s project would’ve likely been regulated to the downstairs exhibit at previous auto shows, but the increased industry focus on mobility means Sigma-6 gets prime real estate on the main floor.

Level four autonomous means the bus can operate without any human input within a certain area – one step below full autonomy. Yucer says a model of this bus operates on the Michigan State University campus.

“It’s exciting that we can show off our vehicle here too,” Yucer shares. “This is a very new and developing industry.”

“The suppliers here are charging stations and battery makers, instead of what it might’ve been like in the old days.” — Dave Coulter, Oakland County Executive

“The suppliers here are charging stations and battery makers instead of what it might’ve been like in the old days. So the show definitely has a very different feel to it but I think it’s appropriate because that’s the way that the world is going.”

The Detroit Auto Show is hoping to change with the times. The way people buy cars now is different than before the COVID-19 pandemic impacted the world.

Many automakers are losing interest in highlighting their products at what amounts to a glamorous dealer showroom. Some shows, like Germany’s International Motor Show, are even relocating as a result of changes in consumers’ habits.

For organizers in Detroit, 2022 is an attempt to find a new concept that will carry the event into the future. It’s also a chance to convince manufacturers that auto shows are still worth their time.