But will Black EV owners benefit? 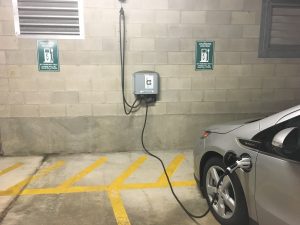 Reporter Jena Brooker interviewed Black EV owners and entrepreneurs who say the placement of charging stations in Detroit and other places is inequitable.

She says it’s not just a matter of convenience. Drivers told her they don’t feel safe plugging in at stations outside the city.

“They told us it’s not uncommon to show up to a charging station in the middle of nowhere only to find that it’s broken or the map was wrong and you’re 50 miles out from the next one,” Brooker says.

EVs may be more affordable than you think

“There’s a perception that low-income people or people of color can’t afford EVs, and that’s not true,” Brooker says. “In the long run, they’re actually cheaper and might be a better alternative for the high-cost barrier that gas combustion vehicles present.”

“They say they would love to pull up on Belle Isle and charge their vehicles while they hang out,” she says.

Read more: The promises — and limits — of electric vehicles

Brooker says Michigan eventually plans to install a charging station on Belle Isle after getting more than $100 million from the Biden administration to boost EV infrastructure.

But some business-minded people are not waiting for the government to intervene.

Brooker spoke with Black entrepreneurs in Detroit who manufacture and install charging stations. She says they’re approaching the problem from all angles, including education.

“They’re trying to hire people of color to install the charging stations,” she says. “They’re saying we need to educate the community and provide job training opportunities to get people on board.”