The American Lung Association’s 2022 “State of the Air Report” revealed millions of people in the U.S. are living in counties with unhealthy ozone and particle pollution. Communities of color were disproportionately impacted. Wayne County, home of several large industrial sites, received an F grade in several categories.

The report combines the most recent air pollution data released by the Environmental Protection Agency. It grades counties and cities and ranks them based on scores for ozone pollution as well as year long and short-term particle pollution levels.

According to the latest report, more than 40% — or 137 million — of Americans are living in places with failing grades for ozone or particulate pollution. 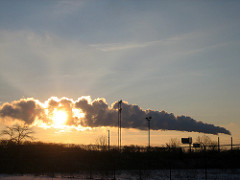 Ken Fletcher is the Director of Advocacy for Ohio and Michigan for the American Lung Association. He says one of the largest counties in Michigan is ranked 24th worst in the nation for ozone pollution.

Fletcher says an increase in ozone action days was a strong indicator that the air quality in Wayne County was failing.

Fletcher says ozone action days are impacting people in every aspect of life. “So those days clearly impact that population who may have some adverse health effects directly related to breathing that air. But even healthy people, if you have a job, say where you’re outside, working all day, breathe in unhealthy air all day, that certainly can impact you too.”

The report highlighted that communities with majority Black and brown people suffered the most. Showing communities of color are disproportionately exposed to air pollution, resulting in a host of chronic medical conditions like asthma, diabetes and heart disease.

According to the report, nearly 19.8 million people live in 14 counties that failed every single test. And out of those almost 20 million people, 14 million are people of color.

Fletcher says communities of color are almost four times more likely to live in a county with a failing grade than their white counterparts. “A lot of our people of color are living in urban areas in our cities. And those are some of the places where we have the worst air quality. So really in terms of equity, we need to really clean up the air in those urban areas so that we can reduce those challenges and those threats to them.”

Fletcher says there needs to be sweeping changes from the state and federal levels. “Governor Whitmer is making steps to implement her plan to help impact climate change and to move in the direction of helping transition to electric vehicles.”