The 1-mile stretch of I-375 in downtown Detroit could be replaced with a boulevard amid a federal review of the project. Gov. Gretchen Whitmer and Mayor Mike Duggan discussed plans to dismantle the freeway Wednesday.

The Federal Highway Administration recently determined that such a project would have “no significant impact” on the surrounding environment. Now, the Michigan Department of Transportation is considering designs for a new streetscape, as the project passes its eighth year of planning. 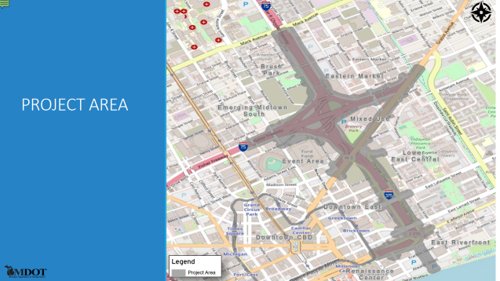 Whitmer says she supports turning I-375 into a boulevard “to reunite a community that was bisected so many years ago. To make sure that it’s livable, walkable, rideable, safe for pedestrians but a place where business can thrive and there’s real equitable opportunities.”

Construction on I-375 started in 1959, displacing African-American businesses and residential life in Black Bottom and Paradise Valley. Whitmer says there is “a sad history” behind the construction of the freeway, which had “devastating impacts.” The boulevard project could unify the surrounding areas today.

“City leadership, state leadership and federal leadership [are] all on the same page on this in recognizing the importance of remedying this long, painful history,” Whitmer says. “We’ve got a real opportunity.”

Whitmer says the state is hiring a historian to document how I-375 disrupted life in the former Black Bottom and Paradise Valley neighborhoods. 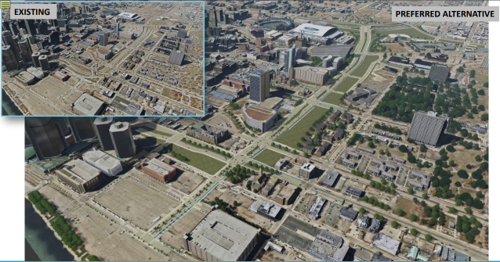 According to the Detroit Historical Society, there were more than 300 Black-owned businesses in the district during the 1920s, when many African American migrants from the South came to the near east neighborhoods. Urban renewal programs in the 1950s replaced Black Bottom and Paradise Valley with the Lafayette Park residential development and the Chrysler Freeway.

A boulevard would improve walkability and re-establish business along the corridor, Duggan says, and there’s an economic opportunity in doing so that accounts for the freeway’s damage to the Detroit’s African American neighborhoods.

“We could have something that honors the history,” Duggan says. “It won’t look like Hastings Street did. But it will look like an area where everybody can be proud of. And we want to make sure that Detroiters are included in the ownership and development.”

Duggan says the I-375 project could resemble recent streetscape restoration in Detroit like the “Avenue of Fashion” section of Livernois. He says there would need to be a combined city and state authority that oversees the development.

The state is holding community meetings to discuss design plans following initial approval from the federal government. Discussions with downtown businesses and residents near I-375 are ongoing.

“Conversations started over in Lafayette Park because we had to make sure the folks that live there felt good about this, and we ended up with a plan they strongly supported,” Duggan says. “And I think the folks on the downtown side support it as well.”

MDOT estimates construction could start as early as 2027 and take three years to complete.