Michigan’s redistricting commission changed the current legislative boundaries, including the 12th and 13th congressional districts. In the 12th, Rep. Rashida Tlaib says she will run in the new district.

That leaves the new 13th wide open, a district that includes Detroit’s downtown and Midtown and stretches from Downriver communities to the Grosse Pointes.

Rep. Brenda Lawrence, Michigan’s only Black member of Congress, announced she wasn’t seeking re-election, and her retirement has shaken up the race in the 13th district.

Here’s who has formally announced their candidacy for the seat as of Jan. 24. 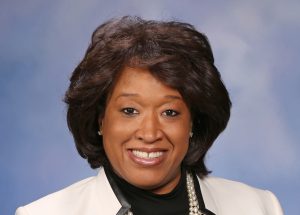 The former state representative for Michigan’s 8th District serving northwest Detroit is now a member of the Detroit school board. She was elected in 2020.

She was among a group of current and former state lawmakers to sue over the newly drawn legislative maps.

“Detroit deserves to have Black leaders,” said Gay-Dagnogo. “We want to make sure that our children have an opportunity to see themselves in the Legislature and for people that will fight for them in our classrooms, in our schools to advocate for policies.”

The former Detroit police chief, who left the department after having an affair that became public, is now an ordained minister. Godbee says woe be unto anyone who campaigns by trying to hold his past indiscretion against him.

“I’m from the east side of Detroit,” Godbee says. “I know how to fight. And if you think about coming for me you better think again. Because I didn’t get where I got not knowing how to fight and make my way up through the Detroit Police Department to be its 42nd chief. And I’m proud of every minute I spent serving the people of God.”

Godbee says he’s entering the race in part because Brenda Lawrence — the only Black member of Michigan’s current Congressional delegation — decided not to seek re-election.

Michael Griffie attended Wayne State University on a football scholarship and graduated with a degree in English. Griffie worked as a high school English teacher for six years before becoming the founding principal of Cornerstone Health High School. He earned his law degree from Western Michigan Thomas Cooley Law school in 2014 and worked with Butzel Long as an employment litigator and as a lobbyist for Michigan Legislative Consultants. He’s the senior managing director of external affairs for Teach for America, a two-year AmeriCorps program that aims to address educational inequities by placing teachers in underserved urban and rural communities across the U.S.

“In this moment, I believe we need a hard work and consensus building whose focus is right here [in Detroit],” Griffie says in a campaign video. 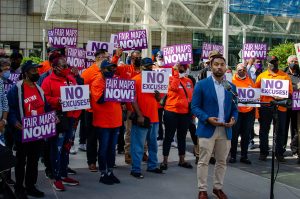 The state senator’s district is entirely within the 13th Congressional District. The Army 2nd Lieutenant and former firefighter is in his first term in the Senate.

He says he’s running to help bring about structural change.

“It’s cliche to say that our system is broken,” Hollier says. “We all know that, but what we don’t talk about is that is by design. Our system is not designed to take care of people. It is fundamentally designed to do exactly what it does.”

Hollier earned a bachelor’s in industrial and labor relations from Cornell University where he played safety on the varsity football team. He holds a master’s in urban planning from the University of Michigan. 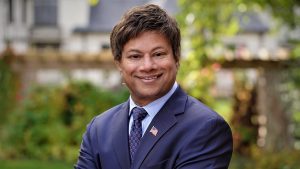 The state rep for Michigan’s 3rd District and former businessman campaigned against Gov. Gretchen Whitmer in 2018 and is serving his first term in Lansing representing parts of Detroit’s west side, where he moved following his defeat.

“My ability to self-fund my campaign allows me to be unbossed, not influenced by the corporations and special interests. And I can truly fight for the people of Detroit,” Thanedar told WDET.

Thanedar immigrated to the United States in 1979. After earning his Ph.D. in chemistry, he worked as a post-doctoral research scholar at the University of Michigan from 1982-8. After receiving an MBA from Fontbonne College in 1987, he worked in the private sector before launching a career in politics.

Reporting by Quinn Klinefelter, Russ McNamara and Eli Newman. The Associated Press contributed to this report.