Listener Kathy Hall Knall has a question about a home from her family’s past in Detroit:

My father grew up in a house with the address 203 Pingree St. between 1925-1935. I can’t find this address now. Was it demolished for the Lodge?

Kathy says her grandparents owned the property starting in 1918, and many of the references the family has to the house come from the period around and during World War I.

203 Pingree was indeed demolished for the construction of the John C. Lodge freeway in the 1950s. However, 203 Pingree was not the address of Kathy’s father’s childhood home at that point. That’s because the city of Detroit underwent a citywide address change in 1920, meaning every single address in Detroit changed. Fortunately for Kathy, her father’s former home still stands.

“As far as I can tell, the history behind the address change was the fact that we really were operating on an antiquated system,” says Detroit Historical Society Curator Joel Stone.

This system — if you can even call it that — meant that as the city of Detroit grew, house and building numbers would be inconsistent on each block. That inconsistency became an especially large problem for the post office during World War I, when it faced serious staffing issues.

A newspaper clipping from the Detroit Free Press in 1918 reads:

“William J. Nagel, postmaster, has petitioned the city council to renumber all the streets of the city that the badly depleted ranks of his force may carry on their work efficiently through the war period. He points out that the growth of the city and establishment of new thoroughfares has resulted in a chaotic condition of numbering. Sometimes a number is given to three city lots, while in other districts a number is given to one lot, with the result that the numbering of parallel streets is at variance.” 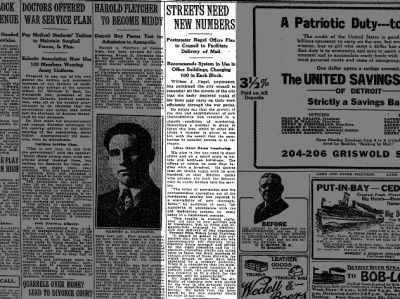 The address change wasn’t approved and implemented until a couple years later. Joel Stone with the Detroit Historical Society says it wasn’t just a huge task for the post office and residents, but anyone in Detroit who printed addresses — such as directory makers and their advertisers.

“And they’ve got to go back and change every address on every single one of those advertisements. The newspapers had the same problem,” says Stone. 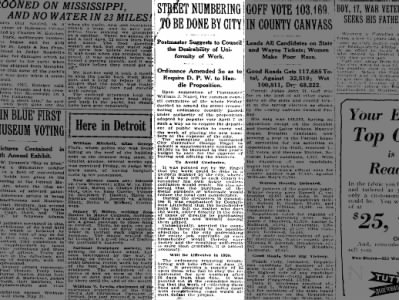 What this meant for 203 Pingree was that the house became 851 Pingree, which still stands. Kathy Hall Knall was elated when she got the news.

“When I found out that that numbering system had changed I was like, a-HA! That’s it! It was just Bingo! It was like solving a puzzle,” said Kathy.

But that elation was short-lived.

Upon visiting 851 Pingree, Kathy’s brother Bill Hall sensed something wasn’t quite right. Although the house is handsome and in great condition, it was not at all how he pictured his father’s house.

“No. I think what I had in mind was more along the line of the brick structures along here,” said Bill.

And Bill’s surprise at the appearance of the house was well-founded. Not long after that visit came an email from Kathy:

“Aunt Virginia (our father’s only sibling) wrote some letters to me years ago regarding some of her childhood memories… She wrote “203” as the house number. But the census and city directory seem to validate that it was 230…..”

Sure enough, the house Kathy and Bill were looking for this entire time wasn’t even the right house.

All indications are that the Halls’ father’s childhood home was indeed 230 Pingree, which — after the address change — became 902 Pingree. That house also still stands, just a couple houses down and across the street from 851 Pingree.

The records are bolstered by the fact that Bill’s reaction to this house was much less skeptical than the first time around.

“Well, it matches what we have in written memoires from our father and aunt,” added Kathy. “And the bits of the photos that we have do show the parts of the brick porch.”

Further newspaper clippings about the 1920 address change in Detroit: 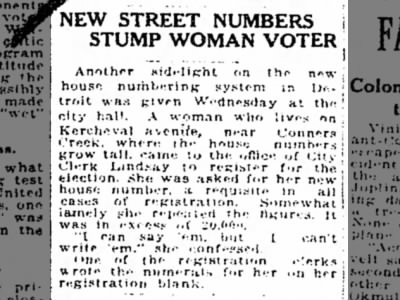 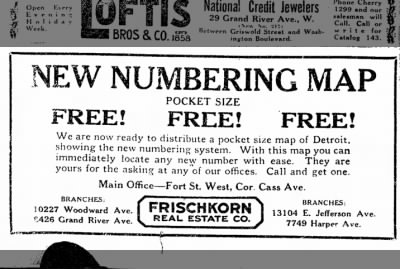 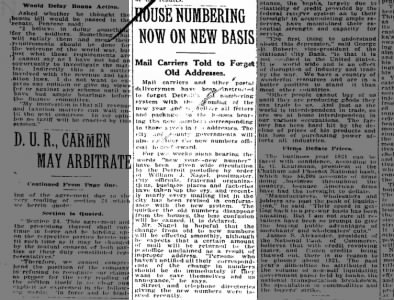 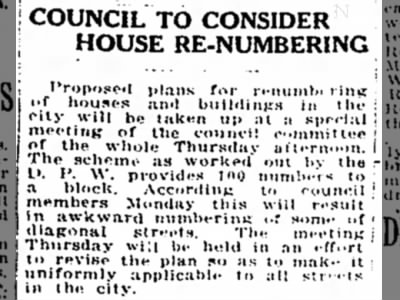 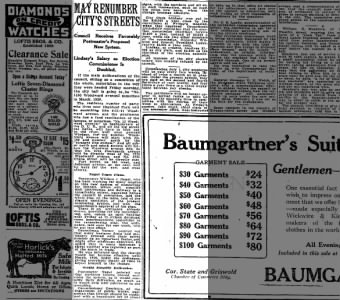 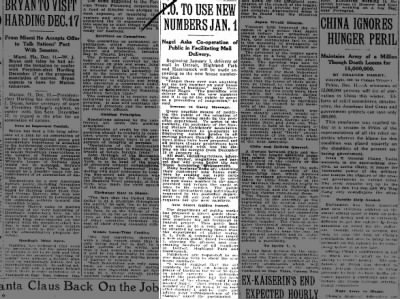