Editor’s note: John Notarianni wrote and produced this report for WDET. It aired in 2007.

During Detroit’s civil unrest in July 1967, President Lyndon Johnson appointed a commission to investigate the causes of race riots throughout the nation that year. He chose Illinois Governor Otto Kerner to lead the panel. The next year, the Kerner Commission presented its recommendations. The report called for better employment, education, and housing in America’s inner cities. Progress since then has been mixed, with some areas prospering and others still mired in poverty, drugs, and violence. One area that’s still trying to recover is Detroit’s Brightmoor neighborhood.

Mark Perpich lived there in 2007. When WDET visited him, a mattress and box springs were leaning against a tree in the front yard. The guts of a projection television sat on a card table. Nailed to the tree, a sign read, “We Support the Police.” Mark and his son were repairing old bicycles.

“We sell these bikes like this, and, clean ‘em up,” Perpich says. “I get lawnmowers that, you know, a lot of guys — I guess they call ‘em, you know, junkin’ and stuff — they come up to me and they sell these things to me.”

After 30 years in the suburbs, Mark had just recently moved back to Brightmoor to look after his aging grandmother. A lot has changed since he last lived here in the ‘70s. In many ways, Brightmoor is emblematic of the problems that Detroit has faced during the last 50 years. Nestled in the northwest corner of the city, Brightmoor was a poor but stable working-class community throughout much of the 20th century. After 1967, however, much of the neighborhood’s white, working-class core staged a quick exodus to the suburbs. Mark’s family was one of the first to go.

“After 1974, after the 70s, that’s when it started really getting bad,” Perpich says. “I’ve known a lot of people who lived in this neighborhood. We moved from Detroit to Canton. Everybody was around here and moved out that way.”

For decades, the population continued to plummet, and jobs evaporated. Stories of the rough neighborhood - nicknamed “Blightmoor” - permeated the city. And, as crack cocaine spread throughout the streets in the ‘80s, the neighborhood became synonymous with urban decay.

“You wouldn’t want to come around this neighborhood because there was, you know, crack houses blowing up,” Perpich says. “My grandfather was telling me that the house right next to me got blown off the foundation.”

For few neighborhoods in the city was the drug epidemic more destructive, or its consequences more persistent, than Brightmoor. In the late ‘90s, the Detroit News described Brightmoor as a place where “dozens of drug dealers loiter conspicuously on street corners and in front of abandoned houses, brazenly advertising their presence by waving and shouting to passing motorists, ‘I’ve got it.’” Today, as downtown Detroit undergoes a dramatic facelift, neighborhoods like Brightmoor continue to struggle. Unlike some of the more fortunate neighborhoods of the city, revitalization efforts have taken longer in Brightmoor. A major housing initiative in the ‘90s resulted in many of the homes suffering the same vandalism and neglect they were built to alleviate. The city government singled out Brightmoor for urban renewal as part of the Next Detroit Initiative. But many residents were skeptical. Two young men, Cado and Chris, felt the effects of the riot 40 years after it happened.

“I was born after the riots, so I don’t know too much about it,” Cado says. “But I know the riots we got going on in the streets.” The other young man, Chris adds, “the riots around here right now is bad. It’s like with the young generation growing up right now, it’s just, they, it’s crazy out here, you know?”

Cado and Chris grew up in Brightmoor. Chris says, for them, precious little had changed in 2007.

“Every day it’s shooting, killing around here, from the east side to the west side,” Chris says.

“I mean, Detroit hasn’t recuperated, as far as the surroundings and how things happened,” Cado says. “I mean, it ain’t changed at all.”

These young men gave a lesson in entrepreneurship to a group of neighborhood children, who had set up a lemonade stand on colored milk crates. Cado and Chris say they hope to shield the kids from the violence they saw growing up.

They take pride in the small community they share here with their neighbors. They look up to William, a strong, astute man in his 40s, whose responsible for much of the unity on the block.

“We try to keep people from gutting the houses out, or tearing aluminum siding off,” William says. “We look out for each other - especially our children.”

William grew up in the ‘60s. He says he benefited from having both his maternal parents and grandparents looking over him, a safety net that few kids have today. William brushes off any suggestion that white flight has anything to do with the collapse of his neighborhood. He finds fault with the failures of men in his community to set a positive example for the youth.

“The riot has come to pass,” William says. “So, you know, it’s a mentality of the people. If people allow other people to rent space in their head, they don’t have space for their own thoughts a lot of times. So a lot of people want to be followers instead of being leaders. That’s what I see as wrong with Detroit. It’s not enough leaders.”

William’s leadership has influenced Chris and Cado, who agree that people, not the government, are responsible for Brightmoor’s future. Still, change is a long and arduous process. Sheila Scott sits on her front porch with her brother and his wife. Across the street is a burnt, boarded up house and an abandoned lot. She points to the burned-out house. 40 years after the riots, she said her neighborhood was still burning.

“I don’t know whether it’s accidental or what,” Scott says. “And one night my daughter and her fiance was coming home and they saw the fire from the back. And they called the fire department. So many fires be starting from these houses when they sitting…abandoned, you know, and you have to watch for things like that.”

Scott’s optimism seems peculiar. When asked about the abandoned lots, she says she likes the peace and quiet of the neighborhood. She’s willing to turn a blind eye to crime as long as her family remains safe. The city closed a number of notorious public schools in the area. But Sheila has no complaints there, either.

“The schools are good,” Scott says. “I didn’t have any problems with the school.”

Sheila Scott cares a great deal about her children’s education and speaks glowingly about her granddaughter, who was three months old in 2007. But, in a neighborhood where the opportunities are so slim, and challenges can seem insurmountable, optimism becomes a weapon to battle the uncontrollable. Scott refuses to concede that things are worse for her children today than they were in the 60s. She holds the conviction that such a tragedy could never happen again in her city.

If there’s one thing the residents of Brightmoor share, it’s this resilience. The riot of ‘67, and the decades of poverty, violence, and hardship that have followed chased thousands away. Countless families will never come back. But along these dirty streets, and among these burned out homes, people are still struggling to make a decent living. For those who are left, their hope is hardened into stern conviction. Rather than looking for a light at the end of the tunnel, Brightmoor has learned to make do with what it has. The anniversaries of the past tend to lose their gravity when you’re struggling to survive in the present.

In 2017, there’s progress in Brightmoor. Several neighborhood groups, businesses, and community organizations are working to improve the community. They include the Greening of Detroit, the Detroit Partnership, Summer in the City, the Brightmoor Alliance, and Scotty Simpson’s Fish and Chips. 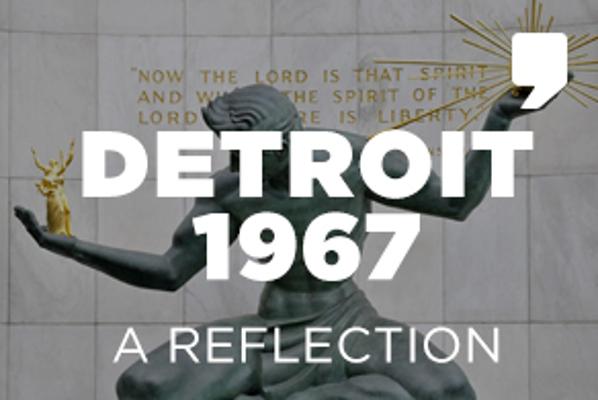