*SOLD OUT* What's So Funny About Detroit? - Comedy Showcase 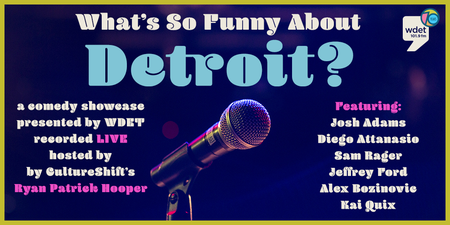 What’s So Funny About Detroit? is a stand-up comedy showcase that will bring some of the strongest, most diverse voices in metro-Detroit’s comedy scene to the stage at Go Comedy! Improv Theater in Ferndale, Michigan. This showcase is created and hosted by CultureShift host and producer Ryan Patrick Hooper.

Born in Lima, Peru, Diego Attanasio has quickly become one of the most notable acts in Michigan and throughout the Midwest for his rapid-fire delivery and on-stage charisma.

Dubbed a rising star in Detroit’s comedy scene by 101.9 WDET, Sam Rager has mastered the blend of personal storytelling with huge laughs on her debut stand-up comedy album Trigger Warning.

Born and raised in Detroit, Jeffrey Ford is one of the most talented comedians working in the city today.

A huge presence in metro Detroit’s comedy scene, producing several local shows and telling jokes from the perspective of a gay man. He has opened for comedians Jen Kirkman, Joe Mande, Guy Branum and Eddie Pepitone.

A transfemine and queer comic living in Detroit, Kai Quix is the host of the LGBTQ comedy night “Quix, Women and Queers.” Quix was profiled by WDET in 2018.