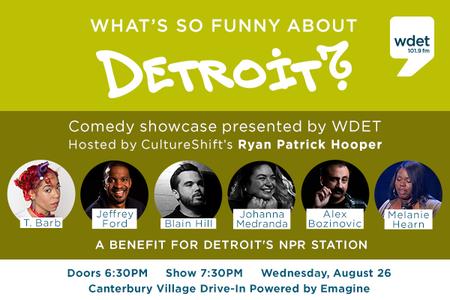 Some of the funniest comedians from Detroit are taking the stage at Canterbury Village Drive-In Powered by Emagine in Lake Orion, Michigan.

While the comedians perform on stage with their image projected on the drive-in screen, the audio of the performance is broadcast directly into your vehicle via your radio.

WDET’s own Ryan Patrick Hooper is your host for the evening as he introduces you to (6) hilarious comedians — Melanie Hearn, Alex Bozinovic, Blain Hill, Jeffrey Ford, Johanna Medranda and T. Barb.

It’s socially distanced, hilarious fun as WDET showcases some of the most talented, diverse voices from the city’s independent comedy scene. WDET does not censor the comedians in any way. Some content may not be appropriate for all audiences. The opinions of the comedians do not reflect the opinions or values of WDET.

This event is a benefit for 101.9 WDET-FM Detroit’s NPR station.

Tickets are $35 per car. Up to 6 people are allowed inside one vehicle.

Tickets must be purchased in advance online. There are no drive-ups.

Doors open at 6:30 p.m. You cannot hold spaces for other vehicles.

So how exactly does this work?

WDET’s “What’s So Funny About Detroit?” comedy stand-up series is moved to the drive-in! Imagine comedians on a stage projected on a big screen with the audio pumped into your car at a drive-in theater. The big screen (30ft x 14ft) has a bright LED light that can be seen even in sunlight conditions.

How can I hear the show?

Turn your radio dial to 98.5 FM transmitter. You can hear the show through your car radio.

Will Social Distancing measures be in place?

Of Course! All tickets must be purchased in advance and online only. Tickets (or phone tickets) will be scanned through window glass with your window closed. All Canterbury staff will be wearing masks and gloves. Each vehicle will be given a 14ft x 20ft space for you to stretch out and relax in your lawn chair, too.

What can I bring?

Feel free to bring your own snacks and drinks. NO outside alcohol allowed. Canterbury Village will have their concessions open. NO Pets due to safe social distancing concerns.

Since her start at Mark Ridley’s Comedy Castle, Melanie Hearn has become a fast-rising talent in the metro Detroit comedy scene. The Detroit native has opened for national comics like Lil Duval, Karlous Miller, Faizon Love, Tammy Pescatelli, Mark Curry, Preacher Lawson and more. She has been sweeping the scene making her presence known with a unique versatile mix of realism and sass she’s just as nice as she is naughty. Melanie delivers a fun high energy show that really gets the crowd involved in her act.

Alex Bozinovic has been a comedian on stage and presence behind the scenes for five years, quickly making a name for himself in the local scene. He has opened for comedians Jen Kirkman, Joe Mande, Guy Branum and Eddie Pepitone.

Blain Hill has been a staple of the Detroit comedy scene for the better part of the past decade, a regular at the local clubs his incisive and silly jokes have allowed him to perform at festivals and comedy clubs across the country. He also is 1/3 of the Big Time Garbage podcast which can currently be seen live nightly at twitch.tv/BigTimeGarbage.

Born and raised in Detroit, Jeffrey Ford is one of the most talented comedians working in the city today.

Johanna Medranda is a comedian from Metro Detroit who offers a unique spin on family affairs, heartaches and bowel movements. Her “in your face” comedy is jam packed with true stories and fake accents. Originally from Peru, Johanna uses her unusual upbringing as fuel for your entertainment. Outside of performing, she is the co-founder of Honorary Mentions Comedy Productions along with a producer for 313 Comedy and The Independent Comedy Club. Johanna is a Laughfest Roast Battle finalist. She has also performed for Bricks & Bridges Comedy Festival, StoopFest 2019 and has opened for comedians Liza Treyger, Stavros Halkias, Nicole Schreiber, and Brody Stevens. This past year, she helped produce and performed for Motor City Comedy Festival and successfully toured from Detroit to NYC.

Tiffany “T.Barb” Barber is a comedian, mother, entrepreneur, radio host, producer and vegan chef who used laughter as a way to get through life in the rough streets of Detroit. As a first generation college graduate, Tiffany broke the curse of incarceration in her family and never allowed the odds to beat her. Always known for being funny and keeping a smile, she discovered stand up comedy & has been blazing stages since! Her charismatic & versatile delivery makes her a fan favorite sure to crack any crowd!