*SOLD OUT* WDET Comedy Showcase - What's So Funny About Detroit? 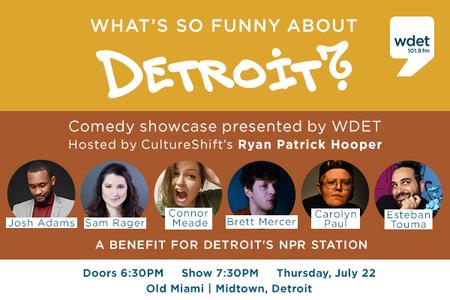 We’re bringing six of the city’s funniest stand-up comedians to the iconic Old Miami bar & backyard in Midtown Detroit. (This event is 21 and up.)

Get your tickets now »

This event is a benefit for 101.9 WDET-FM Detroit’s NPR station. The cost of your tickets directly supports WDET and will also go towards compensating the comedians, who are critical members of the city’s performing arts community.

This event will be held in the gorgeous backyard of Old Miami, so please dress appropriately for the weather. In the event of rain or severe weather, this event will be canceled and your tickets will be refunded. PLEASE BRING YOUR OWN CHAIR and/or BLANKET.

Level-up your lawn-chair game with the WDET Festival Chair! Make a gift of $360 to benefit WDET today and we’ll have it for you to pick up at the event. Just add “What’s So Funny About Detroit?” in the comments.

Food and drinks available for purchase. The House of BBQ food truck will be on-site with vegetarian and meat options.

Dubbed a rising star in Detroit’s comedy scene by 101.9 WDET, Sam Rager has mastered the blend of personal storytelling with huge laughs on her debut stand-up comedy album “Trigger Warning.”

From the moment Connor Meade entered the Detroit comedy scene she has effortlessly captivated audiences with her curvy jokes. Week after week the midwest has come to count on her to twist our daily experience into punchlines that take aim at everyone. While developing her hard hitting jokes she has quietly become one of Detroit’s up-and-coming producers through her work with the Independent Comedy Club and other local outfits, and flooded the local scene with stage time and unparalleled curatorial power.

Brett Mercer has been performing comedy and producing shows in Detroit since 2014. He’s performed in bars, coffee shops, living rooms, recycling centers, and (occasionally) comedy clubs all over the country, wondering what “the deal” is with a variety of topics, large and small. He is one of the hosts of the long-running comedy podcast Big Time Garbage. He has performed at Motor City Comedy Festival (Detroit), Whiskey Bear comedy festival (Columbus), and Let’s Fest (Fort Wayne) and has shared the stage with Paul F. Thompkins, Andy Kindler, Todd Barry and Stavros Halkias.

Carolyn Paul is a Detroit comedian who has used her three years on the scene to lovingly deliver pointed roasts and tender punchlines. Her distinct humor has taken her across the country and earned her work with incredible comedians such as Sean Patton, Minori Hinds and Amy Miller. She is the host of Chuff Schmitz presents the VanDyke Show, an outdoor, pun-heavy comedy show produced out of the side of a van. She also co-hosts the Each Others’ Mothers podcast, available on all streaming platforms.

Esteban Touma is a comedian from Ecuador adjusting to life in the US. He was featured in Comedy Central and was part of Clusterfest “Up Next” showcase in San Francisco. His comedy has also been featured on NPR, The Moth, the NBC Second City Break Out Festival, was a contributor to Wisconsin Public Radio, and has opened for comics such as Judd Apatow, Mark Normand, Michelle Wolf, and Wyatt Cenac. The U.S. Government once officially declared him an “authorized legal alien with a reentry permit.”