The Thai-American Street Food Festival is happening this weekend and organizers say it’s more than a place to enjoy delicious street foods. They say it’s also a celebration of culture and belonging in a place. 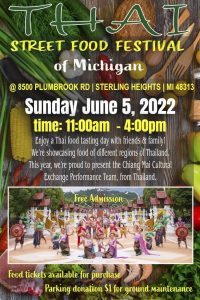 The Thai-American Association of Michigan is hosting the festival. It was formed in 2004 in response to a growing Thai population in Sterling Heights and Warren.

Dr. Su McKeithen-Polish is the former president of the Thai-American Association of Michigan. She says street food in Thailand is a creative experience.

“It’s like a showcase,” McKeithen-Polish says. “It’s not just cooking and bringing the beautiful dish out to people. But for you to see the whole it’s an art.”

The cultural festival is expected to gather not just the Thai-American community in southeast Michigan but also communities across cultural boundaries. McKeithen-Polish says the music and cuisine will reflect multiple regions in Asia.

“So we’ve got food to represent different regions. And it acts as a way of bringing us together, and to also share our cultures and food with the public.”

With attacks against Asian Americans on the rise, the festival is a way to educate the surrounding communities about the Thai population.

“When I see someone who is making comments or things that are inappropriate, the first thing I think I say is their lack of knowledge, or awareness,” says McKeithen-Polish. “So that’s when I want to open up conversation.”

The Thai-American Street Festival takes place this Sunday at the Buddhist Meditation Center in Sterling Heights. It runs from 11 a.m. until 4 p.m.