Flowers aren’t the only things that bloom in spring. Algae will soon be sprouting again in western Lake Erie.

The microorganisms form when nutrients such as phosphorus enter the lake. A common source of phosphorus is farm fertilizer, which can run off fields when it rains. The run-off flows into rivers and streams that empty into the lake.

“We definitely don’t expect it to be among the worst.” — Rick Stumpf, NOAA Oceanographer on early algal bloom projections for Lake Erie

Scientists monitor the growth of algal blooms each year because they have the potential to become toxic. Cyanobacteria, which give algal blooms their greenish-blue color, create microcystins that are harmful to humans and animals. 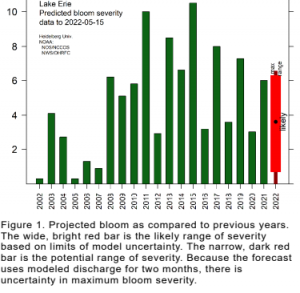 Rick Stumpf is an oceanographer with the National Oceanic and Atmospheric Administration. Each spring, he and his NOAA colleagues make projections on the severity of Lake Erie’s annual algal bloom.

Stumpf says they base their estimates partly on summer rain forecasts and how much phosphorus is already in the lake. He says the early indications suggest a moderate algal bloom in 2022.

How bad is bad?

NOAA rates the severity of harmful algal blooms on a scale of 1-to-10, with 10 being the worst.

While scientists can’t predict how toxic an algal bloom might be, they can detect toxins already present in the lake.

“We call it a ‘lab in a can,'” Stumpf says. “It has everything needed to measure toxins and it does that at least every day.”

Stumpf says the ability to measure toxins has improved dramatically since 2014, when microcystins contaminated Toledo’s municipal water system. The city monitors its water intakes around the clock and posts daily updates and test results on its website.

What makes an algal bloom harmful? Stumpf says that often depends on the weather.

“Cyanobacteria like sunlight and warm water,” he says. “And they grow best under calm weather.”

Stumpf says if Lake Erie warms up early in the season, the algal bloom may form sooner than usual. But he says, so far, that’s not happening yet.

While you can’t see cyanobacteria without a microscope, Stumpf says there are signs you can look for before you go out on the lake.

“The first thing is scum,” he says. “If there’s scum and the water looks obviously greenish, they should stay out.”

NOAA updates its harmful algal bloom projections weekly and publishes a seasonal forecast at the end of June.