The Restorying Agency Project is described as a self-guided tour through Metro Detroit’s Eco-imagination, a term that speaks to imagining ourselves and our relationship to the environment and encourages thought toward new ways of being here, on Earth with each other.

Bridget Quinn and Owólabi Aboyade curated the project and worked with a group of artists and activists who developed deep relationships with specific places in and around the city. Restorying Agency offers journalistic interviews, site-specific art installations, meditations and sound walks as ways to deeply explore and consider the sacred, scarred, interconnectedness and relational properties existing within the ecological environment. 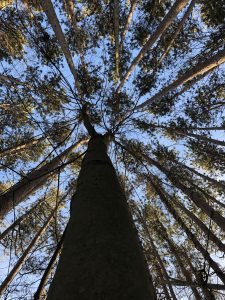 As curators,  Quinn and Aboyade worked with artists and activists who developed deep relationships with specific places in and around the city, centered them as experts and encouraged them to enter the project with thoughts and a response to shifts forming within the ecological environment.

“One thing as an artist and curator, I’ve been interested in is how our relationship and health with the environment are so interconnected,” says Quinn. “Whether it’s the perspective of an artist or activist, these [installations] are invitations for people to see for themselves how people are exploring a healing process that takes place both within the environment but also within our bodies.”

Aboyade adds, “At the same time, there’s a thing of beauty. I think that you don’t have to avoid acknowledging that there’s exploitation or this pain in order to appreciate the beauty and I think that all of the sites allow us to hold that complexity.”

Take a virtual tour of the sites here.

Listen: A deep-dive discussion about the Restorying Agency Project.